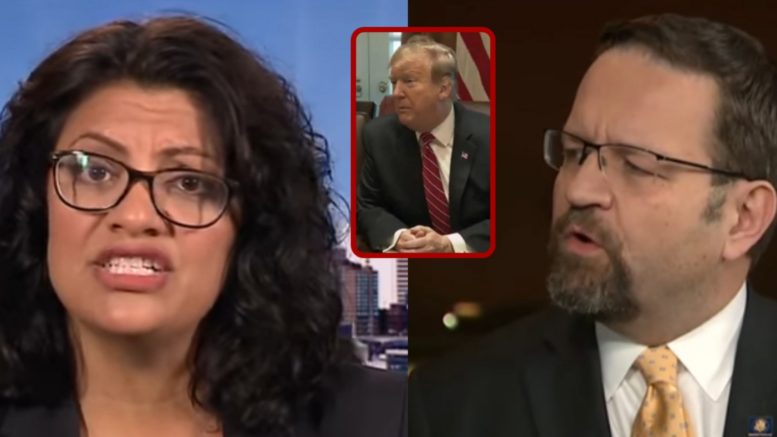 Democrat Congresswoman, Rashida Tlaib, was very upset at the Supreme Court’s decision to give President Trump the green light for major wall projects along the southern border.

On Friday, the Supreme Court lifted a lower court order that blocked $2.5 billion in unspent military funds for wall projects in California, Arizona and New Mexico.

In wake of seeing the news of Trump’s huge legal victory, Rep. Tlaib took direct aim at the President, and cited the higher court’s decision for why Trump should be impeached.

Tlaib tweeted an article by Politico that covered the Supreme Court’s wall decision, and captioned it, “It’s time to impeach folks. Our country demands it.”

Related Article: Nadler Condemns ‘Send Her Back’ Chants, Gorka Puts Him In His Place: ‘You’re A Lying Piece Of Putrescent Garbage’

Trump’s former Deputy Assistant, Sebastian Gorka, couldn’t believe the train of thought behind Tlaib’s tweet, and fired back with a vicious response of his own. See Below

It's time to impeach folks. Our country demands it. https://t.co/zXqVZH1zAa

In reaction to Tlaib’s tweet, Gorka said, “This woman is a lunatic.”

“The Supreme Court VINDICATES President Trump, therefore he must be impeached??” Gorka asked. “Rashida Tlaib really hates America and our Constitution.” See Below

This woman is a lunatic.

The Supreme Court VINDICATES @realDonaldTrump therefore he must be impeached??@RashidaTlaib really hates America and our Constitution. https://t.co/HLgNjv9m0f

In ending, here is a video that has gone viral of Tlaib, showing her having a meltdown while being removed from a 2016 Trump rally:

Rashida Tlaib is an unhinged lunatic. Can you imagine what would happen if someone like her had any actual authority? pic.twitter.com/KK3f0ozOHb