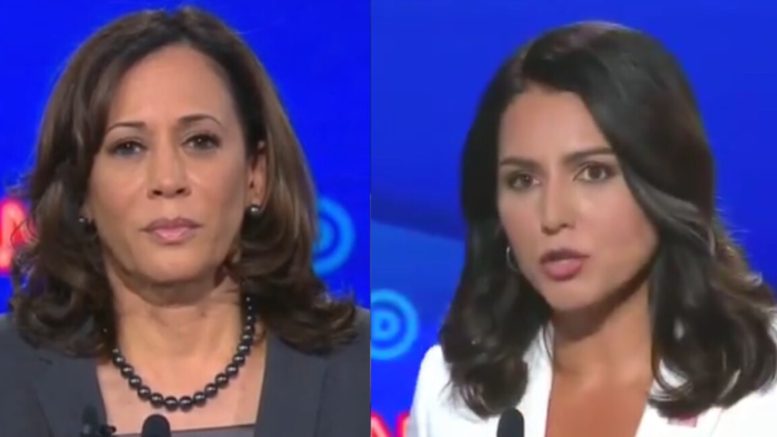 Gabbard slammed Harris for her record on criminal justice while she was California’s Attorney General and listed instances of which she was concerned.

Rep. Gabbard was asked a question about former Vice President Joe Biden, but she turned the conversation to Sen. Harris.

“I want to turn the conversation back to the broken criminal system that is disproportionately negatively impacting black and brown all across this country today. Sen. Harris says she’s ‘proud’ of her record as a prosecutor and that she’ll be a prosector president, but I’m deeply concerned about this record,” Gabbard said.

She pointed out Kamala’s interview on The Breakfast Club where Kamala bragged and laughed about inhaling marijuana. “There are too many examples to cite, but she put over 1500 people in jail for marijuana violations, then laughed about it when she was asked if she ever smoked marijuana. She blocked evidence that would have freed an innocent man from death row until the courts forced her to do so,” she continued.”

Gabbard went on to say, “She kept people beyond their sentences to use them as cheap labor for the State of California, and she fought to keep the cash bail system, that impacts poor people in the worst kind of way.” (Continued Below)

The Hawaii Congresswoman lastly declared, “And worse yet, in the case of those on death row, innocent people, you actually blocked evidence from being revealed that would have freed them until you were forced to do so. There is no excuse for that. And the people that suffered under your reign as a prosecutor, you owe them an apology!”

While she was California’s attorney general, Senator Harris defended capital punishment but has since changed her tune after Gov. Gavin Newsom of California said he’d sign an executive order halting the death penalty in the state.

Harris said she was proud of her work when given an opportunity to respond, and added that she wasn’t “just giv[ing] fancy speeches” as she pointed to Gabbard. (Video Below)

A few responses from Twitterverse:

Harris:
-Fought to keep inmates locked up in overcrowded prisons so they could be used for cheap labor.
-She “championed” a law that put the parents of truant kids in jail. https://t.co/git8VMcXXM

If Kamala can’t handle a Congresswoman from Hawaii, she will get DESTROYED by our President.#DemDebate

There will be no Kamala Harris T-shirts on sale tonight folks. #DemDebate

Harris had nothing… and then said she was always against the death penalty, but went on to say she was “proud” of her death penalty decisions. 🤔#DemDebate

She kept innocent defendants locked up while KNOWING there was exonerating evidence.

We leave you with Kamala Harris discussing prosecuting parents for their child’s truancy: