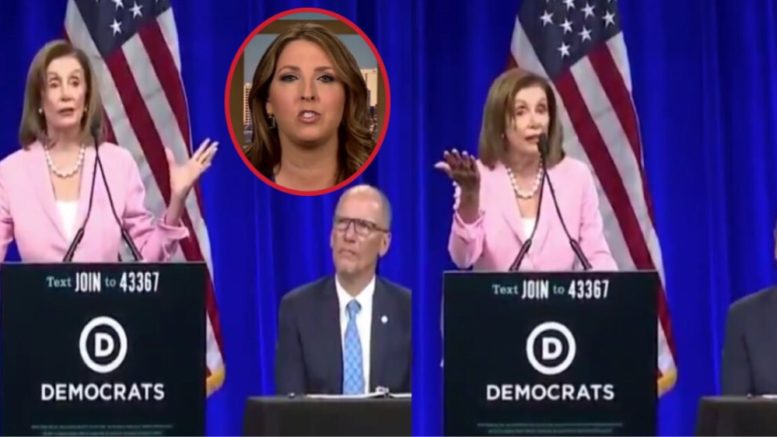 On Friday, House Speaker Nancy Pelosi (D-CA), told Democrats at the Democratic National Committee’s summer meeting in San Francisco, California that they have to “be ready to take a punch” and “be ready to throw a punch for the children.”

While speaking to the audience, Pelosi estimated a “tough election” in 2020 because “it’s about money” for President Trump and the Republican Party, saying, “They will put up any amount of money to protect their investments in degrading the environment, guns, and all of that.”

“So are we ready to win? Have we decided we are going to debate our differences unified behind our candidates? Are we going to strengthen our majority in the House to win the United States Senate for the American people, to win the White House for America, for our children, for the future?” she asked. “Thank you Democrat National Committee. I know you will make that happen.”

Ronna McDaniel wrote, “The DNC summer meeting has been rife with hostility between fellow comrades, and now Nancy Pelosi says this.”

“Is this the Democrats’ vision for civil discourse in our country? McDaniel asked.

A number of Democrats have encouraged violence, namely Rep. Maxine Waters (D-CA), who called for people to “confront Trump officials in public spaces”. “If you see anybody from that Cabinet in a restaurant, in a department store, at a gasoline station, you get out and you create a crowd and you push back on them, and you tell them they’re not welcome anymore, anywhere,” Maxine said last summer. (Video Below)

The DNC summer meeting has been rife with hostility between fellow comrades, and now Nancy Pelosi says this.

Is this the Democrats’ vision for civil discourse in our country?https://t.co/mJ3ZZDof1W

Pelosi was proud and retweeted her “throw a punch- for the children” statement:

The stakes could not be higher. Just as we did in 2018, Democrats have made the decision to win in 2020!

If you would like to file a complaint at the office of Congressional Ethics, please do so HERE.

(Related: Pelosi Claims ‘A Violation Of Status Is Not A Reason For Deportation’ & Asks ‘What’s The Point’ Of Interior Enforcement)