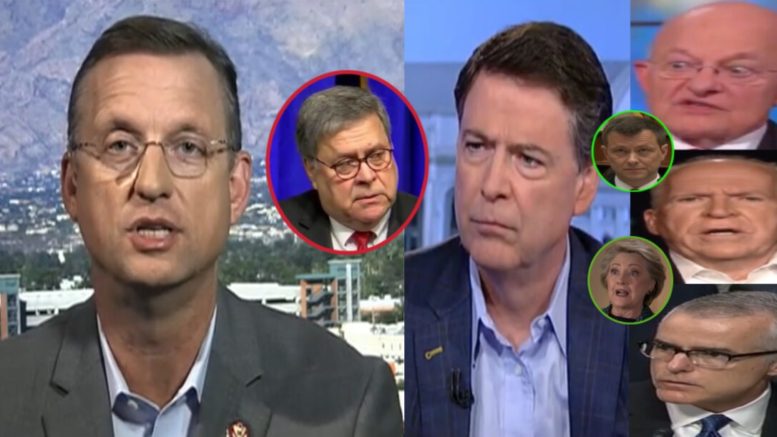 On Thursday, the Department of Justice Inspector General, Michael Horowitz, released a report pertaining to former FBI Director James Comey after he “leaked material to the press” along with storing “memos” at his house.

The IG reported that Comey “violated standard procedures” during his time in the Trump administration; stating he set a “dangerous example” after leaking.

“By not safeguarding sensitive information obtained during the course of his FBI employment, and by using it to create public pressure for official action, Comey set a dangerous example for the over 35,000 current FBI employees—and the many thousands more former FBI employees—who similarly have access to or knowledge of non-public information,” Inspector General Michael Horowitz wrote, in part.

Ranking Member of the Judiciary Committee, Doug Collins (R-GA), ripped Comey after the former FBI Director demanded an apology amid the release of the IG report, and revealed why the “corrupt cabal” should still be worried.

James Comey responded to the report on Twitter by downplaying the seriousness of the IG’s findings. “DOJ IG ‘found no evidence that Comey or his attorneys released any of the classified information contained in any of the memos to members of the media.’ I don’t need a public apology from those who defamed me, but a quick message with a ‘sorry we lied about you’ would be nice. And to all those who’ve spent two years talking about me ‘going to jail’ or being a ‘liar and a leaker’—ask yourselves why you still trust people who gave you bad info for so long, including the president,” he wrote.

Rep. Collins said the IG report confirms that James Comey is someone who “cannot be trusted” and that he had a “personal vendetta” against President Trump. “He believed that his role in the FBI was one that he was the ultimate arbiter of being judge and jury in anything that he did or not like,” he said. (Continued Below)

“The problem we are finding here is that [Comey] can say anything that he wants to. He can say that he didn’t lie, but we know he did. He lied to the FBI when he told them he was not truthful about what he did with some of those memos. We can tell that he leaked because he used a ‘third party mule’, his attorney, or others if you want to, to actually get the memos out there,” the Ranking Member said.

“And, he’s also very disingenuous because you can see right through him. This is just a joke. For him to go on Twitter and ask for somebody to apologize to him… I gotta better idea: ‘Why don’t he take his white robe that he’s been wearing around and notice the stains on it… when he gets those stains out from lying, then maybe someone can apologize to him,'” Collins suggested. [Emphasized]

Collins reassured that this is “one part” of the Inspector General’s report and “one part” of things that are still left to come. “I think Mr. Comey, again, and I’ve talked about this with [Andrew] McCabe, Comey, [Peter] Strzok, the all corrupt cabal that was there– they’ve still got a lot of things to worry about– how they handled, what I believe is coming in the FISA investigation– the complete FISA investigation, not just this piece that came out. I think Mr. Durham is still looking into these issues as well,” he explained. (Video Below)

Collins said that what the American people should know after two years is that we have an Attorney General who said “we are going to get to the bottom of this”, along with an Inspector General who is continuing his investigation, and U.S. Attorney John Durham, who is looking into the wrongdoing that was believed to be done by the Comey and his cabal– the origins of the Russia probe.

“We still have a lot left to go. If I was some of this ‘corrupt cabal’, I think I’d still be worried,” the Georgia Congressman emphasized.