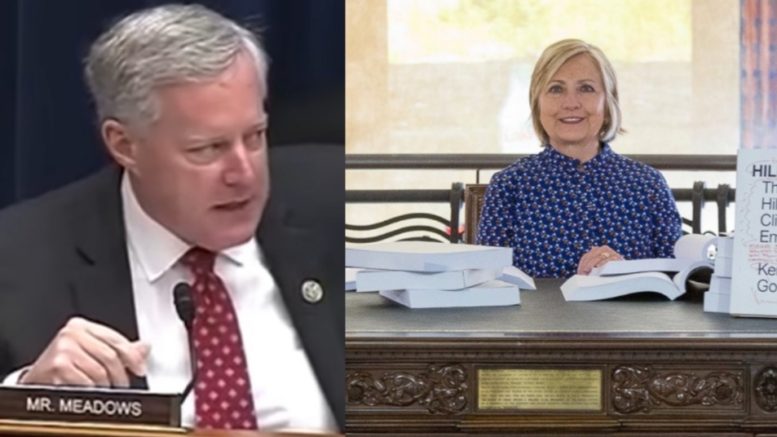 On Wednesday, images surfaced online showing Hillary Clinton posing with printed stacks of 62,000 of her emails while sitting at a mock version of the Oval Desk at an art exhibition in Venice, Italy.

As per The Huffington Post: “Goldsmith’s exhibition makes public ‘for the first time in printed format’ some 60,000 pages of Clinton’s emails, which, per WikiLeaks, ‘were sent from the domain clintonemail.com between 2009 and 2013,’ according to the description from exhibit co-organizer Zuecca Projects.”

The description also says the emails are “un-impressive” and the artist created the “anti-monument to the folly of Trump’s heinous smear campaign against Clinton.”

During her surprise visit to the exhibit, Hillary spent about an hour reading through some of her thousands of emails and is quoted by Goldsmith as saying, “They are just so boring.”

She also reportedly claimed, “This exhibition is further proof that nothing wrong or controversial can be found on these emails. It makes them accessible to everyone and allows everyone to read them.” See Below

Hillary Clinton Poses With 62,000 Of Her Emails

Hillary Clinton spent an hour yesterday reading her emails at my exhibition of all 62,000 pages of them in Venice. She is pictured here at a replica of the Oval Office Resolute Desk, stacked with her emails. pic.twitter.com/V8T27klycr

Republican Congressman Mark Meadows responded after seeing the images floating around social media, and he couldn’t help but mention the 30,000+ emails that are alleged to have been destroyed from her private server.

In a reply to Goldsmith’s tweet, Meadows asked, “Does this include the 30,000+ emails she deleted off of her private server with Bleach Bit?”

“Or were those emails on the phones her aides smashed with hammers,” he added.

Does this include the 30,000+ emails she deleted off of her private server with Bleach Bit?

Or were those emails on the phones her aides smashed with hammers https://t.co/riIjR2siVO