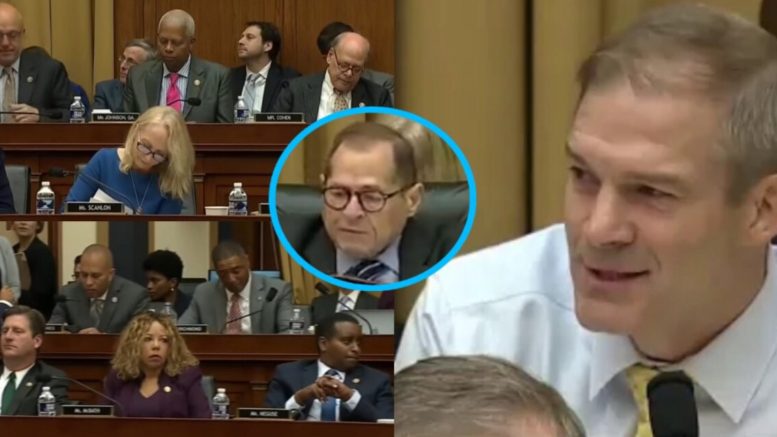 House Judiciary Democrats on Thursday ramped up their “Trump impeachment push” after returning from their August recess, as they “set the ground rules for a formal committee inquiry,” but Republicans, however, called out the Democrats effort to move the needle before the committee voted.

The committee voted 24-17 to define the rules for future committee impeachment hearings. The committee is not writing articles of impeachment, and nothing is going to the floor of the House right now, but the session still holds political consequences for both sides of the aisle, as reported by Fox News.

Rep. Jim Jordan (R-OH), however, looked at Democrats during his opening argument and exposed why they’re “changing the rules” in their impeachment effort.

“Two days ago, Democrats on the House Judiciary Committee voted to take away an American citizen’s Second Amendment rights. You voted to do that even though if that citizen committed no crime. And you voted to allow the rights to be taken in a court proceeding that that citizen doesn’t even get to show up to defend him themselves,” Jordan began.

“Now today, you’re changing the rules to make it easier for you to pursue impeachment of the President of the United States. [You’re] changing the rules nine months into the new Congress! First, you vote to take away American’s firearms, then you vote to impeach the guy they elected President all in one week! Actually, all in less than 48 hours, in the House Judiciary Committee. The committee that’s supposed to protect the rules, supposed to protect Constitutional rights, all in less than 48 hours you’re doing it,” he pointed out.

Then Jordan asked the Democrats, “And why are you changing the rules? [Be]cause nothing else has worked for you!” (Continued Below)

Jordan went on to explain that the hearings for Michael Cohen, John Dean and Robert Mueller “were a flop.”

“So let’s change the rules in the middle of the game because we gotta find something,” he said referring to the Democrats’ “search for a crime.”

“Never forget how this whole thing started,” Jordan continued. “A false accusation about the President of the United States– saying the President coordinated with a foreign country to influence the election.” (Continued Below)

The Ohio Congressman fired off: “Jim Comey investigated that for 10 months! Guess what? He found nothing. And we know he found nothing because we deposed him and he told us. After 10 months they didn’t have a thing. But that didn’t stop it. 22 months later, Bob Mueller does a special counsel investigation and he investigates it for 22 months and what does he tell us? Other members have already said this: ‘He found nothing.’ No coordination between the Trump campaign and Russia to impact the election.”

“Thirty-two months of investigations, they find nothing, but what do Democrats want to do? Change the rules, keep investigating, [be]cause we gotta find something so we can impeach this President,” he noted. “Maybe the country would be better served.”

Then, Jordan turned the tables: “Maybe the constituents we represent would be better served if we actually figured out how the false accusations happened! And the good news is as I’ve said before in this committee: that’s exactly what the Attorney General of the United States is doing. And thank God for Bill Barr! That’s exactly what he’s doing.

“But you know what? We could do the same thing,” he pointed out. “Why don’t we start with the Inspector General for the Justice Department, which we have jurisdiction over? [Who] just issued a report two weeks ago, a scathing report on the guy who’s most responsible for this three-year saga that our country has had to live through? Jim Comey, the guy who opened the investigation of July 2016. Jim Comey, the guy who allowed Peter Strzok to run that investigation after that guy had ran the Clinton investigation– after that guy had said to Lisa Page and other FBI employees, ‘Don’t worry Lisa, we’ll stop Trump.'”

“Jim Comey, the guy who allowed the dossier to go to secret court to be used to spy on a fellow American associated with the Trump campaign. Jim Comey, who leaked information to The New York Times through his friend, so he would get the special counsel. Jim Comey, the guy who on January 6th, goes to Trump Tower trying to trap the President, while he’s telling the President he’s not under investigation. [A] scathing report by the Inspector General on that guy!” he declared. (Video Below)

“And when I asked the Chairman two days ago, two days ago, when he was busy taking away people’s Second Amendment rights– when we might have a chance to question the inspector general, his response– the Chairman of the Judiciary’s response was, ‘I don’t know, we haven’t thought about that.’ That is scary! When you have the Inspector General issue that kind of report and the Chairman of the Judiciary Committee doesn’t even know a thing about it, hasn’t even thought about when we’re gonna bring him in so we can talk to him!” Jordan expressed.

(Related: Rep. Jordan Irritates Nadler After Asking When He Will Invite IG Horowitz To Testify: ‘I Don’t Know, We Haven’t Discussed That’)

Congressman Jordan concluded, “This is the Judiciary Committee for goodness sake. And think about what is happened in 48 hours in this committee! This is scary, and everyone in the country knows. And everyone who said this earlier, they know that there aren’t the votes to do this. There aren’t the votes to do this right, so you’re playing this game in the Judiciary Committee of all places! Maybe if you were a little less focused on taking people’s second amendment rights and impeaching the guy they made President, we could actually do what this committee is supposed to do.”