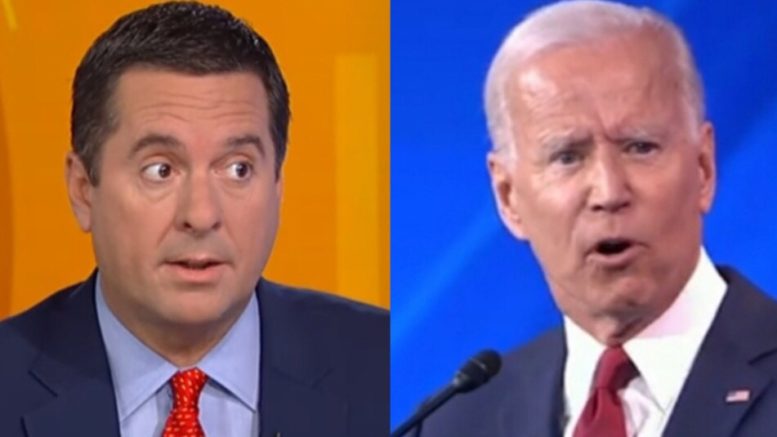 Ranking member of the House Intelligence Committee, Rep. Devin Nunes (R-CA) spoke with host Maria Bartiromo on Fox News’ “Sunday Morning Futures” where he weighed on the allegations from the reported whistleblower, who claimed President Trump used the power of his office to pressure the Ukrainian government to investigate Hunter Biden, the son of former Vice President Joe Biden.

Asked what he is expecting from Joseph Maquire, Rep. Nunes said, “We’ll be interested to see what his thoughts are as to why this information should not be provided to Congress. Most people believe because it was a privileged conversation that the President had with another foreign leader, which history we have ‘never’ received those.”

Nunes said he is not opposed to receiving the “privileged conversations” between President Trump and other world leaders, however, he wants “all of the conversations that happened between vice president Joe Biden and the Ukrainians, Barrack Obama and Putin, [and] Barack Obama and the other world leaders” adding that it really “opens pandoras box.”

Asked if President Trump did anything “improper” as leftwing media is suggesting, Nunes replied, “This has all the hallmarks of the ‘Russia hoax.’ Right? It’s the same– let’s just go through it. Something leaks out that there’s something bad that happened and then it’s the same reporters that report on it– the same exact reporters that reported on the Russia hoax report on it.” (Continued Below)

He continued, “Then you move forward, and what happens? Then supposedly they come testify, the night before they testify– this whistleblower, who supposedly doesn’t want anybody to know who this person is or what information they have, well it spilled all over the pages of the Washington Post the day before the IGIC, the inspector general for the intelligence community comes in and briefs us.”

“Whoever came up with this scheme, because it looks like somebody trying to deflect what Biden did back in 2015. He’s definitely got some questions that he needs to answer as to what he was doing talking to the Ukrainian leadership at the time when his son has a contract. We want to get to the bottom of that also,” Nunes explained.

“But this scheme seems to have backfired on Biden. [He’s] already dropping in the polls and this probably could be the end,” the intel ranking member added. (Video Below)

(Related: Graham Discloses Why DOJ Needs To Appoint An Investigator To Look At ‘All Things Ukraine’: ‘I Don’t Trust The Media To Do This’)

“Maybe this whistleblower is not partisan, we want to hear from him. But it sure looks like the scheme has backfired. Like I said, I think this is the end of Biden’s campaign. He’s still formidable, he still has a block of support, but if you look, his lead is basically down to zero. If look at Iowa now, it looks like Elizabeth Warren is in the lead,” he added.

(Related: Rep. Meadows On The ‘Ukrainian Hoax’: ‘Biden Will Be The One That Is Left With Egg On His Face’)