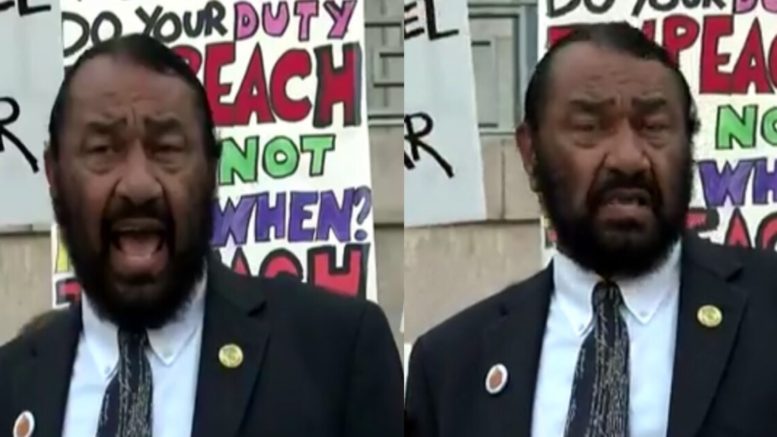 On Monday, Rep. Al Green (D-TX), told Democrats during a rally that they could “risk losing their supporters at the ballot box in next year’s elections if they don’t move forward with the impeachment of President Trump.”

The impeachment debate was brought back to life again last week after a mysterious “whistleblower” raised his concern over a conversation between President Trump and Ukrainian President Volodymyr Zelensky pertaining to former vice president Joe Biden and his son Hunter.

The Texas lawmaker, who was one of the first on Capitol Hill to push for impeachment, continued his efforts at a pro-impeachment rally, per Fox News.

“My statement will be brief. We are at the crossroads of accountability. Either hold the President accountable or we will be held accountable. Congress has to act. And for those who believe in polls, there’s a Quinapec poll from July this year and it indicates that more than 51% of the people believe that the President is a racist. The people are speaking. They believe that this President should be removed from office,” Green claimed.

“It is my belief, that as a member of Congress I have a duty to facilitate the removal of the President from office. This is why on 3 separate occasions, I have brought articles of impeachment to the floor of the House of Representatives,” he said.

“If we do not present evidence to the people, then people will be driven by opinions, that generally speaking, are inaccurate. It’s time for us to step up and understand that if we don’t hold the President accountable, we will be held accountable,” he said.

The Democrat House Speaker has long resisted calls to impeach President Trump, but with pressure from within her party, Pelosi specifically said that a whistleblower who reportedly alleged that Trump acted improperly during a July 25 phone call with the Ukrainian President must be allowed to speak to Congress, and the full whistleblower complaint must be provided. (Video Below)

Pelosi, however, warned that if the Trump administration continues to block the intelligence community whistleblower from disclosing the complaint to Congress, “they will be entering a grave new chapter of lawlessness which will take us into a whole new stage of investigation.”

President Trump tweeted earlier in the month quoting Green, “We can’t him, so let’s impeach him!”

“We can’t beat him, so lets impeach him!” Democrat Rep. Al Green

Rep. Green’s statement begins at 16:50 into the video: