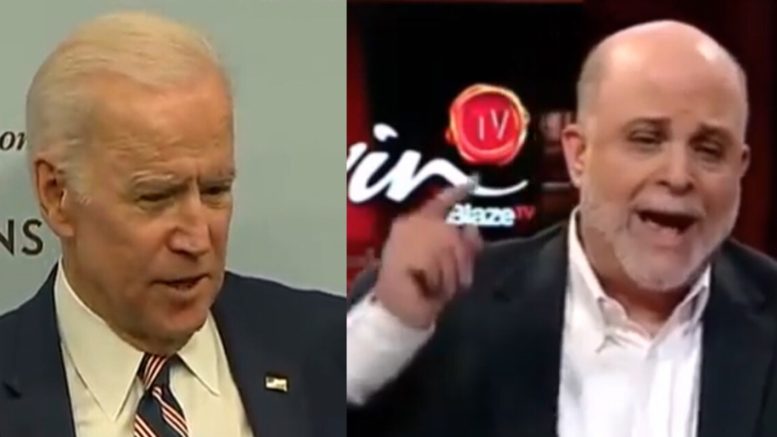 Fox News host Mark Levin, “the great one”, spoke with host Sean Hannity Monday where he slammed the mainstream media for protecting 2020 Democratic presidential candidate, Joe Biden, from the controversy over his son’s business dealings in Ukraine.

This comes after an alleged phone conversation with President Trump and Ukraine’s President Volodymyr Zelenskiy, involving former vice president Joe Biden that, if proven to be true, could put a major dent in Biden’s campaign. The phone call, however, prompted a mysterious whistleblower to file a complaint with the ICIG (Office of the Intelligence Community Inspector General).

Levin said that the Biden family is “corrupt” and “obstructed justice in the Ukraine” and explained that Joe Biden “blackmailed the government to get the Ukrainian prosecutor removed” adding “not just to protect his son, but to protect his future run for president of the United States.”

“You have a massive Democrat scandal here. That’s why the media are conducting themselves the way they are, that’s why the Democrats are trying to turn this inside out– to immunize Biden and to attack Trump, but it won’t work,” Levin argued.

The former vice president admitted on camera that the U.S. would withhold $1 billion in loan guarantees from Ukraine if the prosecutor was not fired.

Inspector General Michael Atkinson of the office of the Director of National Intelligence (DNI) wrote in a Sep. 9 letter to the House Intelligence Committee that the whistleblower complaint “appeared credible” and related to an “urgent” matter. But, the DNI general counsel said days later that, after consulting with the DOJ, the matter did not meet the legal definition of an “urgent concern,” and was not subject to mandatory disclosure to Congress, as reported by Fox News.

CNN reported last week, “The whistleblower didn’t have direct knowledge of the communications, an official briefed on the matter told CNN. Instead, the whistleblower’s concerns came in part from learning information that was not obtained during the course of their work, and those details have played a role in the administration’s determination that the complaint didn’t fit the reporting requirements under the intelligence whistleblower law, the official said.”

“There was some guy who read something or heard something but wasn’t in on the President’s conversation. And by the way, I am sick and tired of this President’s conversations with foreign leaders being leaked to the media and Democrats on Capitol Hill. I don’t remember a damn one of those happening to Obama or any other president. Our president has to be able to speak to other heads of state without this kind of tyranny taking place!” Levin declared. (Continued Below)

Levin noted that Ukraine’s foreign minister insisted there was “no pressure” from Trump in the July phone call with Ukrainian President Volodymyr Zelenskiy, but that remark “doesn’t fit the narrative” that the mainstream media wants to present.

“I don’t care what the media think[s]. We know they’re incapable of covering this because of their ideology. But the truth shall set us free. I understand what the Democrats are doing in the House. They want to destroy the President, they’re using their committees as opposition research, they’re circling the wagons, they’re trying to immunize Biden,” he continued.