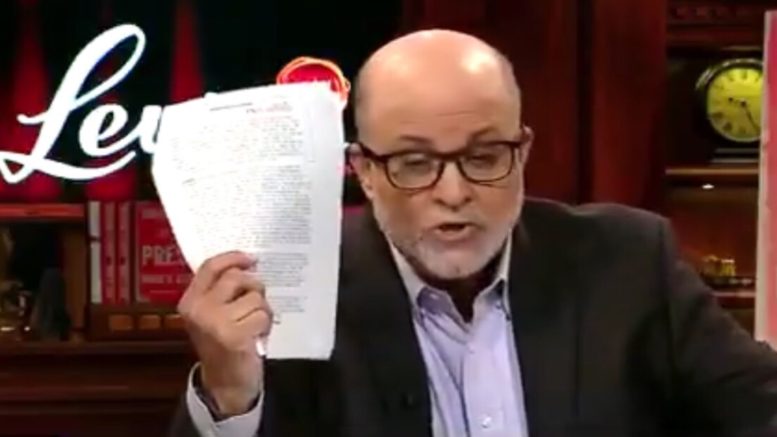 Mark Levin, “the great one” spoke with host Sean Hannity on Fox News Thursday where he slammed what he called a “rogue CIA agent’s” whistleblower complaint against President Trump over his phone call with Ukrainian leader Volodymyr Zelensky and pointed out multiple suspicious aspects of it.

He also took aim at House Intelligence Chairman, Adam Schiff (D-CA), and House Speaker Nancy Pelosi (D-CA) where he connected dots and suspected their possible involvement in orchestrating the complaint from the “whistleblower.”

“When it comes to Trump, the Democrats and the media are like drug addicts looking for their next fix. Their eyes are popping outta their head, the sweat beads are coming down their face, they raise their voices, they swing their hands, they become disgruntled and all the rest. They are really freaking out,” Levin began.

He pointed out that the “whistleblower’s” lawyer worked for Chuck Schumer and Hillary Clinton, and they don’t want their identity known. “Too bad pal! Too late. You want to impeach our President using this B.S.? We want to know all about your guy. This guy could’ve been a homeless guy coming off the street talking to people. He knew nothing!” Levin expressed.

“Isn’t it funny — not a single one of the people with firsthand knowledge [of the call] filed a whistleblower complaint? Not one of them. This guy files it. This guy is represented by Democrats,” he added. (Continued Below)

“I want to know if Adam Schiff or the Democrat staffers or any Democrats were involved in orchestrating this– this leak and coup campaign. [They] did it in Russia, they did it with Kavanaugh, it’s the same damn thing! This is a rogue CIA agent. Look what they did to the FBI. Look at this guy Brennan, a complete reprobate. They exist. There are rogue operations,” Levin said.

Levin then turned to Thursday’s House Intelligence hearing that Rep. Adam Schiff chaired, and demanded that the California lawmaker release his own past phone records.

Levin wondered why House Speaker Nancy Pelosi would declare an “impeachment inquiry like a dictator” a day before President Trump released the transcript between him and President Zelensky. “You know why? Because she had this. She knew about it, the little rogue CIA operative.” Levin suggested, holding up the whistleblower complaint.

Levin also demanded investigations into Sens. Patrick Leahy (D-VT), Richard Durbin (D-IL), and Robert Menendez (D-NJ) for reportedly insisting the Ukrainian government not close probes seen as critical to the Russia investigation. “You have another one, Chris Murphy from Connecticut, who insisted the Ukrainian government not investigate Biden,” he added. “How come they’re not facing ethics complaints? How come they’re not facing expulsion acts in the United States Senate?

“Where the hell are the Republican chairmen in the Senate? Why aren’t they issuing subpoenas — issue your 100 subpoenas, go after their bank accounts, go after their friends,” he recommended. “If they don’t go for it, hold them in contempt.” (Video Below)

(Related: Nunes Rips The Left At Thursday’s Hearing, Calls Out Schiff For Trying To Get Nude Pics Of Trump)