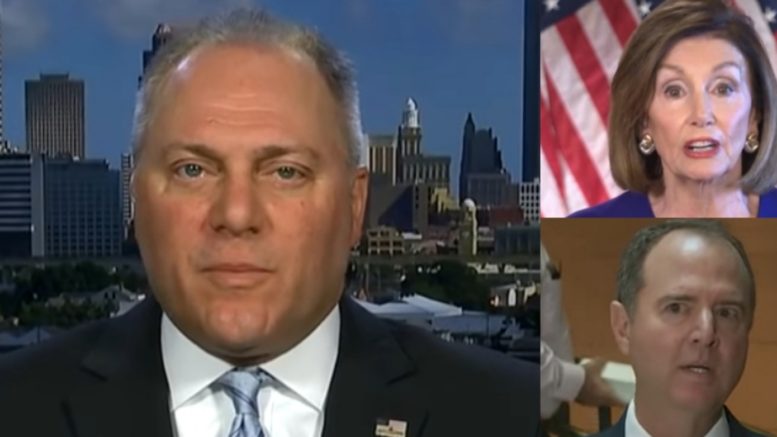 Over the past week, House Democrats led by Nancy Pelosi have been acting pretty serious about impeaching President Trump, in wake of a complaint by a whistleblower.

But Republican Congressman Steve Scalise isn’t buying it. Because if Democrats truly felt President Trump committed a crime and they really had enough evidence to impeach him, he thinks their actions would prove so.

Scalise provided two burning questions that expose the lack of seriousness out of Democrats in their impeachment push.

He first laid focus on House Intel Chairman Adam Schiff who got caught making up excerpts from the phone conversation between President Trump and Ukraine President Zelensky.

Related Article: Rep. Banks Blasts Pelosi For Launching An Impeachment Inquiry Based On A False Rumor, Demand An Apology

“If they were so serious, why did Adam Schiff have to start his committee hearing with a parody, a joke, trying to make fun of this and actually lying about what really happened, and trying to make up a conversation between the President and Ukraine President Zelensky?” Scalise asked. Video Below

Next, Rep. Scalise targeted House Speaker Nancy Pelosi, who announced in the middle of the week that a formal impeachment inquiry is underway. “If she really thought he should be removed, why did she then leave town for two weeks?” he asked.

“The next two weeks, Congress will not be in session,” Scalise added. “If you thought the President committed such a high crime and misdemeanor that he should be removed, would you really leave for two weeks, or would you keep everybody there day and night til you grt to the bottom of the facts?”

He then answered his question: “There are no facts for impeachment. They want to appease their radical base and it’s dangerous, dangerous to go down this road.” Video Below