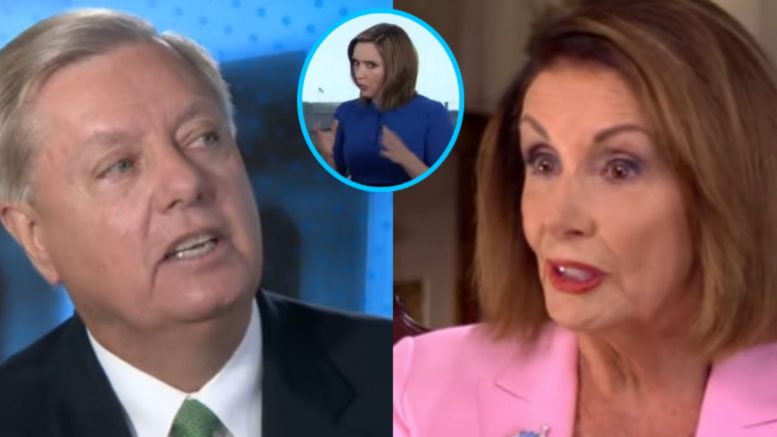 Senator Lindsey Graham opened up more on his thoughts about fallout from the “whistleblower” story and Democrats’ heightened impeachment push, while appearing on Face The Nation with Margaret Brennan on Sunday.

At one point Brennan brought up the “sequencing” of the call record between President Trump and Ukraine President Zelensky that House Speaker Nancy Pelosi claims is most “problematic.”

Asked about whether he had a problem with any of the phone conversation in question, Senator Graham assured Brennan that he has “zero problems with this phone call.”

“I have zero problems with this phone call. There is no quid pro quo here,” Graham declared. “But I do have a problen with Nancy Pelosi.”

“If you believe that Donald Trump did something to hurt this country, you owe it to vote — not talk about impeaching this President,” he proclaimed. “The only way to open up an impeachment inquiry is to vote.” Video Below

Graham went on to challenge House Democrats to have a “John Hancock moment.”

“Quit hiding behind Nancy Pelosi. If you think the President did something wrong in this phone call, then vote to open up an article of impeachment inquiry,” he suggested.

Graham, however, doesn’t think Democrats will vote for an inquiry because he beieves they’re too “afraid”. Video Below

We need a ‘John Hancock’ moment from House Democrats.

If you think the president did something wrong, vote to open up an impeachment inquiry.

Related Article: Stephanopoulos To Schiff: ‘If The Facts Are As Damning As You Say, Why Make Up Dialogue?

We leave you with Senator Lindsey Graham’s full interview with Margaret Brennan.