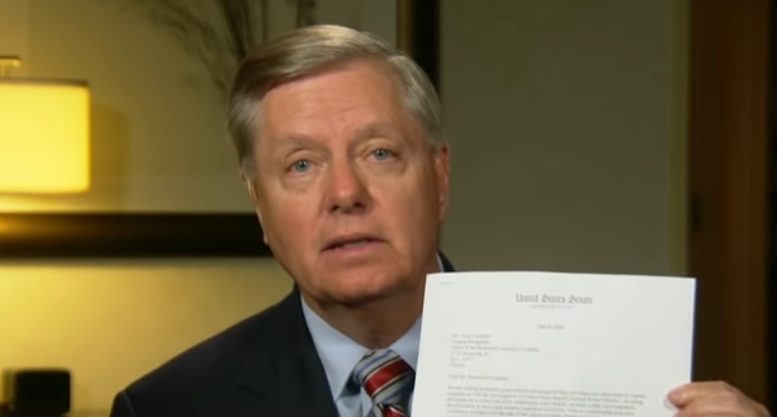 Sen. Graham holds up a letter that Democrat members of Congress sent to Ukraine during the Mueller probe. (Fox Video Screen Shot - Hannity)

Senator Lindsey Graham responded to a recent New York Times hit-piece that he said is a beginning step by the left to try to stop Attorney General William Barr’s probe into the origins of the Russia probe.

In their article, the New York Times alleges President Trump “pressed” Australia to work with Attorney General Barr in his probe into the origins of the Russia investigation.

Graham said the NYT’s article is very concerning for him because he believes it’s “the beginning of an effort to shut down Barr’s investigation to find out how this whole thing started.” And he explained why he feels this way.

If he’s not doing that, he’s not doing his job,” he declared. “So I’m gonna write a letter to all three countries and asking them to cooperate with Barr.” Video Below

Senator Graham then held up a letter that Democrat members of Congress sent to Ukraine that ordered them to work with Special Counsel Mueller in his Russian collusion investigation or they would risk US aid being cut off.

“We’re not gonna have a country like that,” he proclaimed. Video Below