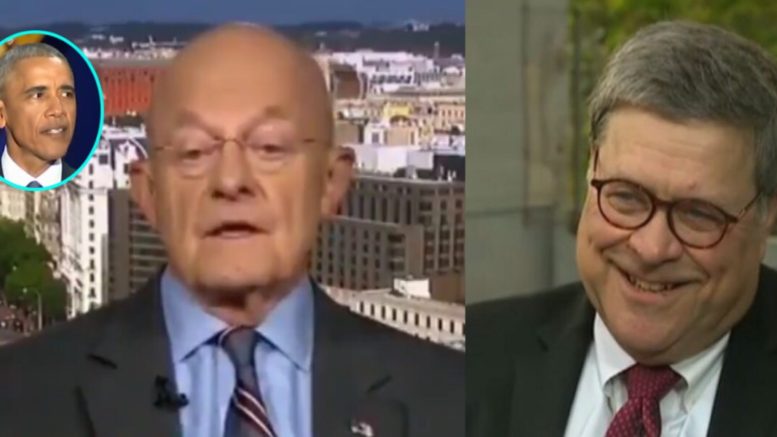 Former Director of National Intelligence, James Clapper, spoke with CNN’s Jim Sciutto on Monday, where he admitted that he and others are being investigated by Attorney General William Barr and U.S. Connecticut Attorney John Durham, for doing what former President Obama “told them to do.”

Sciutto said that the Attorney General is “traveling the world” and meeting with U.S. intelligence partners to investigate whether anyone participated in “Obama-led efforts to undermine President Trump” during the 2016 election.

Asked if he is concerned if Attorney General William Barr or John Durham’s investigations will find wrongdoing and seek to punish former intelligence officials, James Clapper responded, “I don’t know. I don’t think there was any wrongdoing.”

“I think at the time, all of us were trying to navigate a very difficult, politically fraught, highly charged situation. I know from my part, my main concern was the Russians. And the threat posed by the Russians to our very political fabric,” he continued.

“And the message I’m getting from all of this is apparently what we were suppose to have done is to ignore the Russian interference, ignore the Russian meddling, and the threat that it poses to us,” Clapper said. “And oh, by the way, hold off what the then Commander in Chief, President Obama told us to do, which was assemble all the reporting we could, that we had available to us, and put it in one report that the President could pass on to Congress and the next administration.” [Emphasized].

“And while we’re at it, declassify as much as we possibly could to make it public, and that’s what we did,” he added. “It’s kind of disconcerting now to be investigated for having done our duty and what we were told to do by the President.” [Emphasized]. (Continued Below)

Last Summer, James Clapper was heard on CNN’s “AC360” admitting to Anderson Cooper in a live phone call, that former President Obama authorized the “assessment” that set off the sequence of events that unraveled into Special Counsel Mueller’s investigation.

“If it weren’t for President Obama, we might not have done the intelligence community assessment that we did that set off a whole sequence of events, which are still unfolding today, notably, Special Counsel Mueller’s investigation,” he said.

“President Obama is responsible for that and it was he who tasked us to do that intelligence community assessment in the first place,” Clapper admitted. (Video Below)

(Related: Biden Claims Russian Interference Didn’t Happen When He & Obama Were In Power)