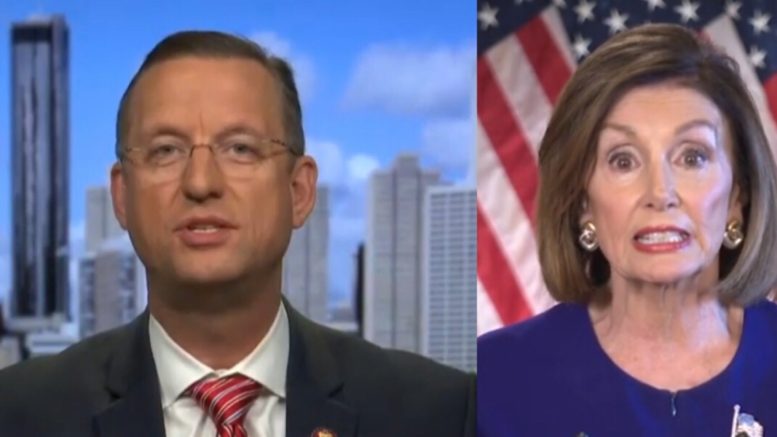 Ranking Member of the House Judiciary Committee, Doug Collins (R-CA) spoke with host Dana Perino Wednesday on Fox News’ “The Daily Briefing”, hitting back at House Speaker Nancy Pelosi (D-CA) after she said that the Democrats will not accept the White House’s letter that explains the President will not participate in their “impeachment inquiry.

“Mr. President, you are not above the law. You will be held accountable,” Pelosi wrote in part.

“[Nancy Pelosi] is assuming the President is guilty. Look at what she said, she said the White House is continuing to hide [President Trump’s] actions. That’s not true and I think it’s a disservice to the American people,” Rep. Collins said. “I think the Speaker needs to be more careful with what she says because they have not been in an impeachment inquiry.”

Collins noted that historically in previous impeachment hearings, referencing Bill Clinton and Richard Nixon, “there was always a fairness issue”, adding that, “The American people are beginning to see that Nancy Pelosi and Adam Schiff like going behind closed doors, where nobody can examine what they’re doing– where they can only ‘leak out’ information that they want to have”.

(Related: WH Counsel Issues A Letter To Dems Specifying Three Circumstances For Why Trump Won’t Participate In Their Impeachment Inquiry)

“Nobody in this country believes that’s American. They believe when they look at it on its face value, they may not like what the President is doing, they may disagree with it, but they do not believe that it should be done in an ‘unfair way’, and that’s what she’s doing right now,” he explained. (Continued Below)

Perino said that Democrats are claiming they don’t have to “hold a vote” to charge the President with obstruction and asked Collins if that is how he reads the Constitution. “What I read here is how the House has done in the historical preference. Let’s put this back where it needs to be. It needs to be in a due process because when the House comes together to form an inquiry, that is their discussion to see if there is something that is actually there, that they will then take and write articles of impeachment,” the Ranking Member of the House Judiciary Committee said.

He noted those are the “actual documents” that you would use to impeach the President, then it would go to the Senate.

“The problem having they’re having here is every time, and I’ve lived through the Circus in the House Judiciary Committee this year, which really it’s not about Mueller, it’s not about the Ukraine, this is about a 2016 election moving into a 2020 election,” Collins said. (Continued Below)

“And for everybody out there, please follow this very closely,” Collins recommended. “If it’s to be fair, the inquiry, just as it was under Clinton, just as it was under Nixon, put rights and procedures in place, where the minority has subpoena rights, where the President and his team actually are able to have input into these processes and they’re not wanting that.”

He explained every investigation the Democrats have conducted has “cleared the President” or showed there is “no impeachable offenses.”

“This President is a disruptor. This President does things. This President is action-orientated and they don’t like that. When he talks about corruption in other countries, he goes after it. They have just simply now found a tool and a solution. Let’s not do it out in public, let not have due process, let’s don’t treat the President with fairness, let’s go behind closed doors and let Adam Schiff run his little kangaroo court any way he wants to, but people out there understand that anybody whose ever been accused in America, you have the right to defend yourself,” Rep. Collins explained.

Asked if the thinks Pelosi will try to “speed up impeachment” as soon as next week, Collins said, “I don’t think it will happen next week. If Speaker Pelosi is willing to put her Speakership, the House majority on the line, if she is willing to try and interfere, really is what I see the 2020 elections, if she’s willing to forward to the American people and explain to the American people why she’s being unfair, why she’s being unAmerican, why she has not asked for due process, why she doesn’t want to do it properly, then that’s a choice she’s gonna have to make.” (Video Below)

“This President has been very clear in everything that’s he’s done. She is the one that is deceiving the American people, and we’ve got to understand if she’s wanting to do this on ‘obstruction’, she’s doing what I call an ‘Al Green impeachment’. She’s just writing up things, taking it to the floor, and then she’s gonna force her members to have to vote on it,” Rep. Collins expressed. [Empasized].

(Related: Glenn Beck Exposes What Dems Are Trying To Hide By Impeaching Trump Over Hearsay: ‘[They] Want You To Only Focus On The July 25th Call’