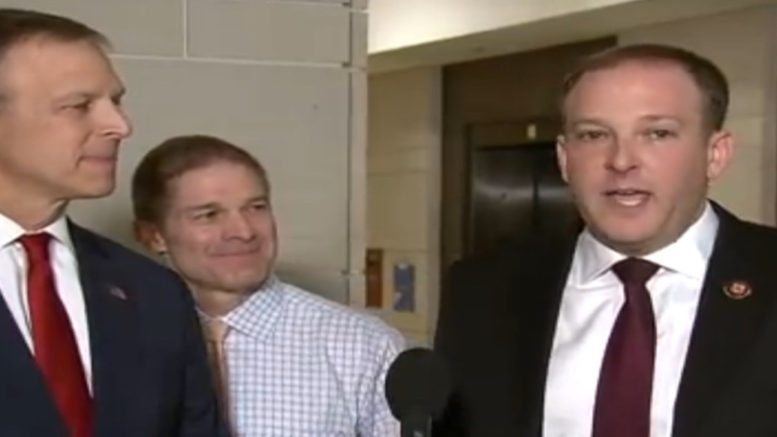 House Republicans spoke to reporters before hearing from President Trump’s former Russia aide Fiona Hill as she appeared for a transcribed testimony before the House Intel, Foreign Affairs, and Oversight and Reform Committees on Monday.

He noted that former Russia aide Fiona Hill was willing to come voluntarily, but Schiff subpoenaed her anyway to “ask certain questions” and again, “keep those secret, except for the certain things that he wants to leak, the ‘cherry picked information’ that he wants to leak to the American people.”

“The tragedy and the crime here is that the American people don’t get to see what’s going on in these sesssions,” Jordan added. (Continued Below)

Rep. Lee Zeldin pointed out that in previous impeachment proceedings, the minority in the House had rights, including the President. “What should happen here is there should be a vote. If the House Democrats want to persue impeachment, they should put their money where their mouth is and have a vote. And there should be a process that allows the minority party to have subpoena power, that allows the President to be present, his counsel to be present at these depositions, to be able to ask questions, to be able to present evidence,” Zeldin said.

“The Democrats should be providing the minority and the President the same rights that they would demand if the roles were reversed. Instead, what you’re seeing is a stratedgy by Adam Schiff and the Democrats to have closed door depositions in his bunker here in the basement of the United States Capitol and then to cherry pick out facts that they think can to spun to best help make their case, by also witholding other key facts, and then, also outright lying,” he continued.

Zeldin also noted that as the aid to Ukraine got released, Ukraine didn’t have to open any new investigations. “All of those facts are being ignored,” he said.

“On the process and the substance, there’s so much that is so wrong about this entire clown show. But it’s really important when talking about the hold on aid and the quid pro quo… that please, cover everything that you do know, even if it doesn’t help take down a sitting President,” Zelin urged reporters. [Emphasized]

They also explained that Schiff said on Sunday during an interview that the reason why he doesn’t depositions to be released is because the “Republicans want the witnesses to be able to compare notes for their testimony”. Zeldin stressed, “These are Adam Schiff’s witnesses! We can’t call any witnesses! We didn’t call these witnesses; these aren’t are witnesses.” [Emphasized] (Video Below)