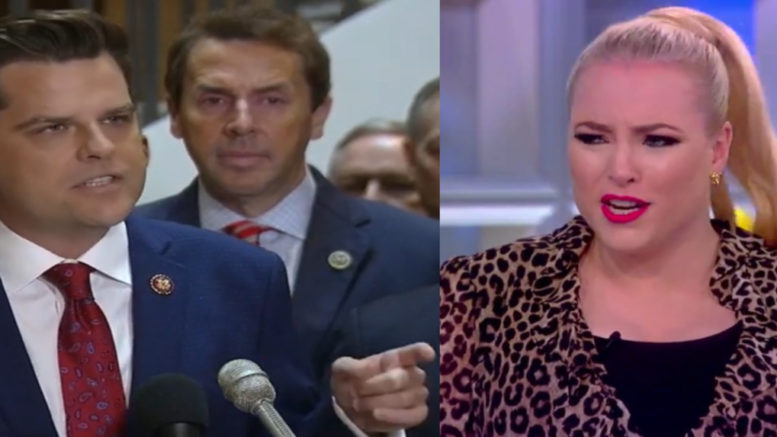 Co-host Meghan McCain criticized Rep. Matt Gaetz (R-FL) Thursday on ABC’s “The View” after he led the fight to demand transparency amid Democrats’ “secret impeachment inquiry”, and he stormed the SCIF with his fellow Republicans in the Capitol Hill basement on Wednesday.

Gaetz fired back at McCain’s criticism by suggesting he’s more likable than her.

Meghan McCain said during the segment, “I hate political stunts across the board in general. I think we elect people to serve in Congress. … I think we elect you to get your freaking job done one way or another– Congress has a 13% approval rating.”

“Matt Gaetz, when did you become a TV star or want to be a TV star?” McCain asked. “You want to do that? Get the hell out of Congress, get a TV job.”

Co-host Joy Behar chimed in and claimed, “No one’s going to hire him. He’s boring.”

McCain added, “Publicity-stunt politics and commentary is the lowest common denominator, most reductive form of politics. I hate it more than anything else in politics.” (Continued Below)

Gaetz swiped back by knocking Meghan McCain’s own likeability on television.

“It’s not my fault I’m more interesting in Congress than she is on television,” he said. “If Meghan McCain wanted me to come on her show to help ratings, all she had to do was ask,” reported Fox News.

During a press conference on Wednesday morning, Rep. Gaetz said, “We’re going to try and go in there, and we’re going to try to figure out what’s going on, on behalf of the millions of Americans that we represent that want to see this Congress working for them and not obsess with attacking a president who we believe has not done anything to deserve impeachment.” (Video Below)