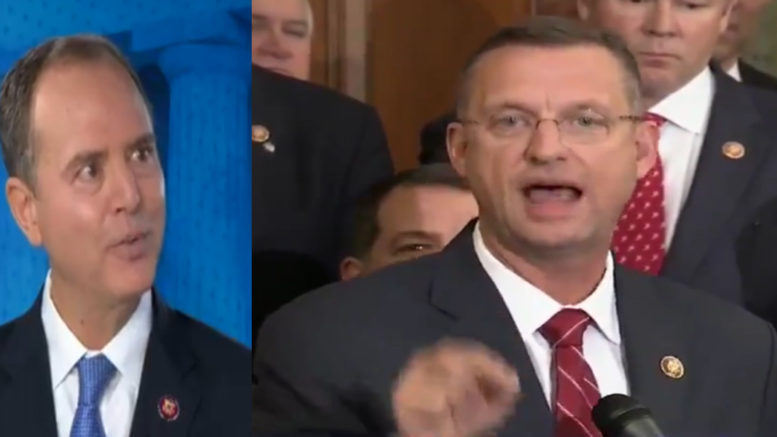 The House of Representatives voted Thursday to pass Democrats’ resolution that sets the “ground rules” for the impeachment inquiry” against President Trump and sets the stage for proceedings to be public hearings after weeks of closed-door depositions, which has been led by House Intelligence Committee Chairman, Adam Schiff (D-CA).

The measure passed 232-196. No Republicans voted for the measure, but two Democrats broke with their party and voted against the resolution: Rep. Collin Peterson (D-MN) and Jeff Van Drew (D-NJ). The House will now leave for a 12-day vacation.

House Rules Committee Chair, Rep. Jim McGovern (D-MA), wrote the Resolution, to which he defended the motion Thursday morning on the House floor.

“As I said on the [House] floor today, what you saw on the House is a very dark cloud falling upon this Democracy. Even more, it’s falling upon the House, because what is happening here today. Mr. McGovern had the audacity to stand there and say today, ‘All Republicans want to argue out process, they don’t want to argue about substance.’ I think our leadership team has said ‘that’s not true,'” Rep. Collins said.

“But let me also say something to Mr. McGovern: process leads to substance. When you screw up the process– that you’re looking for an answer that you’ve already determined. Notice what they’ve done. We’re only putting it in Adam Schiff’s purvue right now. We’ve already heard how that’s unprecedented,” he added. (Continued Below)

“But I want to go to the committee that’s always been impeachment and the impeachment committee should be the Judiciary Committee. If you want to do this right, then Madam Speaker, do it right!” Rep. Collins declared. “Do not lie to the American people and say ‘these procedures put up are the same as Nixon and Clinton.”

“I challenge the Rules Chairman today to say if you want to have that argument, then I’ll have that argument,” Collins noted, referring to his statement on the House floor Tuesday morning before the vote. “Give us plenty of time, and I’ll guarantee you I will win. Why? Because we’re right.”

“… Adam Schiff’s committee now gets to do whatever they want, continued the process without presidential involvement, without presidential scrutiny, without anything else– fairness or bipartisanship in any way that we’ve [seen] in others. How can they stand before you and say that is completely fair? Then give it to a Judiciary Committee, who has been completely neutered of its power? They’ve shown for 10 months they were completely inept in handling the Russia investigation. Do I have to remind you of John Dean?” the Georgia Congressman asked. (Video Below)

“This is pathetic! And then when it came to writing the rules for us, the Rules Committee actually had to write the rules for the Judiciary Committee, because they didn’t even trust them enough to do that,” the Judiciary ranking member pointed out. “So I ask the members of the media: how can the American people trust this Judiciary Committee, which the Speaker of the House doesn’t trust, to handle an impeachment article?”

Then, the Georgia Congressman challenged the House Intelligence Committee Chairman. “I tell you what. When it gets to the Judiciary Committee, I do have one thing for Mr. Schiff. If he wants to be as I’ve said, a special counsel, he set himself up, then here’s my challenge to Mr. Schiff: You want to be Ken Starr? Be Kenn Starr. Come to the Judiciary Committee, be the first witness, and take every question asked of you– starting with your own involvement with the whistleblower,” he declared.

“Folks, this ain’t over! Get ready. The cloud that is dropping will be dropping on their heads because process matters and substance will always win out in the end. This President has nothing to worry about on substance,” Rep. Collins concluded.

Apart from a fair process, Congress will never find the truth. pic.twitter.com/J3KqgXcuOp

The New York Times broke the story on Oct. 2 that Schiff knew about “the outlines” of the whistleblower’s concerns before the Aug. 12 complaint was filed. The whistleblower had contacted an intelligence committee aide after passing along concerns to the CIA’s top lawyer and being “[c]oncerned about how that initial avenue for airing his allegations through the C.I.A. was unfolding,” the Times reported.

New York Times, Oct. 2: The House staff member, following the committee’s procedures, suggested the [whistleblower] find a lawyer to advise him and meet with an inspector general, with whom he could file a whistle-blower complaint. The aide shared some of what the officer conveyed to Mr. Schiff. The aide did not share the whistle-blower’s identity with Mr. Schiff, an official said. (Continued Below)

On Wednesday, Rep. Matt Gaetz (R-FL) filed an ethics complaint against Adam Schiff for “violating House Rules. He also said that Schiff has now made himself a fact witness. And reiterated that the House Judiciary intends to call Schiff before the committee.

.@RepAdamSchiff has now made himself a fact witness. We intend to call him in the Judiciary Committee. pic.twitter.com/RdV0IOSOLz

(Related: Schiff Suggests The WH Blocking Witnesses Will Backfire, Collins Levels Him: ”He’s Already Been Shown To Be A Liar [& Leaker]”)