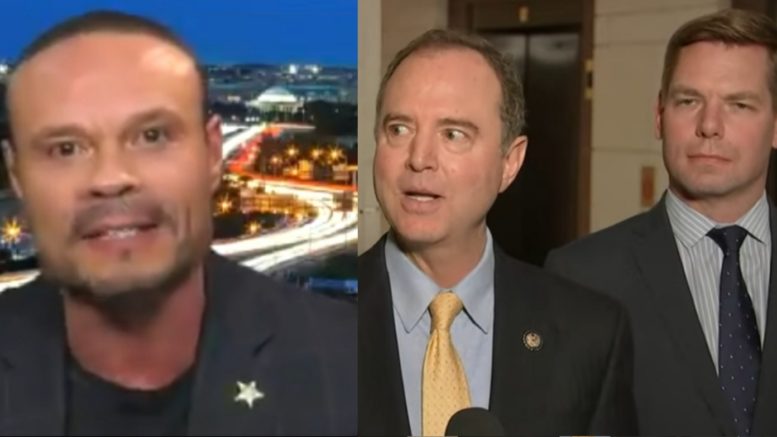 Dan Bongino was fired up on Judge Jeanine’s Saturday night program as he discussed the ongoing “impeachment hysteria” led by Democrats.

Bongino began by taking a jab at House Intel Chairman Adam Schiff who has labeled those who have come forward against President Trump as “courageous.”

“This guy doesn’t know the first thing about [courage],” Bongino said. “He has the courage of a firefly.”

“This case is BS,” he continued. “It’s a farce. It’s a joke. It’s a bad magic act at a kid’s birthday party. It’s based on a transcript…the rest is white noise.”

Then after laying out irregularities with Democrats’ key witnesses, Bongino declared, “This case is a flaming pile of dog waste on your front porch and only idiots believe in this nonsense.”

And to back up his claim, Bongino likened the crime that Democrats are alleging Trump committed to that of a bank robbery. “There was no bank robbery! It’s not that President Trump didn’t rob the bank. No bank was robbed! We have the transcript!” he proclaimed. Video Below

Related Article: John Yoo Reveals How It Would Be “Devastating” For Dems If They Deny GOP’s Witnesses: “The Trial Will Fail In The Senate”

“Trump could release every transcript from his kindergarten days on, it doesn’t matter. They’re just gonna make up another hoax,” he added. Video Below

"This case is a farce, a joke. A bad magic act at a kid's birthday party. The transcript is what matters. What you said, the rest is white noise." –@dbongino on the dems impeachment hysteria continuing. pic.twitter.com/XPp7F9VZtM