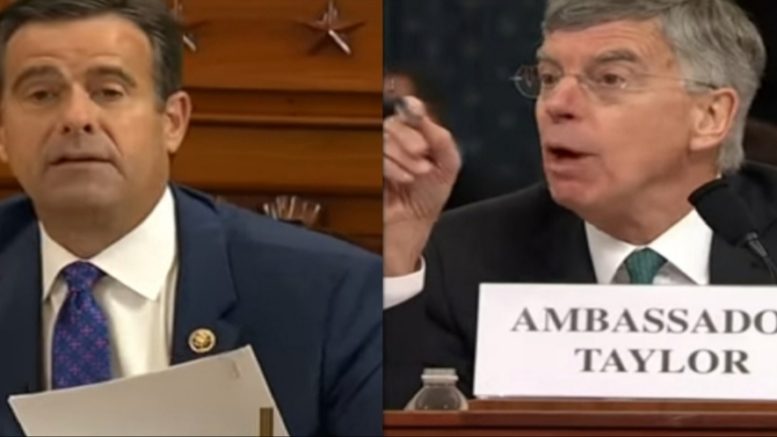 When getting a turn at Wednesday’s public impeachment hearing, Congressman John Ratcliffe extracted some crucial information from Ambassador William Taylor in regards to the infamous phone call between President Trump and Ukraine President Zelensky.

Taylor initially confirmed with Ratcliffe that President Zelensky didn’t know military aid was being witheld from the country during his July 25 phone call with President Trump.

As backup, Ratcliffe cited a press marathon that President Zelensky held on October 10, where he repeatedly stated he was not aware of military aid being witheld at the time of the phone call. And, according to Ratcliffe, this means “there was no quid pro quo involving military aid during that call.”

He went on to say that Zelinsky’s remarks are not “second hand information” or “hearsay” like what was entailed in the first part of the hearing with the Democrats.

When asked by Ratcliffe if he has any evidence to suggest President Zelensky was lying in his statements about the phone call, Taylor replied: “I have no reason to doubt what the President said.” Video Below

Ratcliffe went a step further and asked both Ambassador Taylor and George Kent where there was an “impeachable offense” in the phone call between President Trump and President Zelensky.

After an awkward moment of silence, Taylor answered, “That is not what either of us are here to do. This is your job.”

Ratcliffe ended by stating Democrats would have to call Zelensky “a liar” in order to impeach President Trump for a quid pro quo, abuse of power or extortion. Video Below