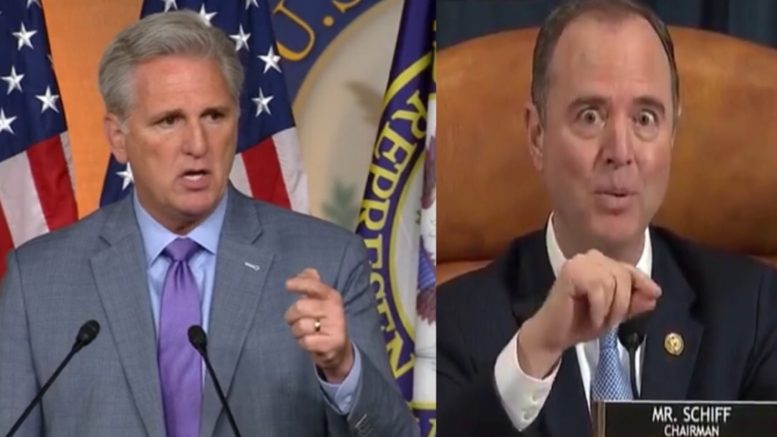 During his press conference, McCarthy flatly stated that House Intelligence Chairman, Adam Schiff (D-CA), is a “liar” and listed several reasons as to why he and other fellow Republican colleagues have lost trust in Schiff.

Asked by a reporter Thursday during the press conference, “How can you call Schiff a liar without any proof. You don’t have any proof, or do you? What proof do you have that he met with the whistleblower?”

“Which time do you want to talk about him lying? When he spoke the words at the Dias of a transcript that he added different words in?” Rep. McCarthy asked.

The reporter tried again: “You said over and over that Adam Schiff met with the whistleblower.”

“Yeah. For the same reason that when Adam Schiff told us that he had proof with circumstantial evidence and he took America through a nightmare. We spent millions of dollars. We took the very best individuals we had in law enforcement. We went to 13 countries. And you know what? We found out he lied,” McCarthy said referring to the Trump-Russia collusion Schiff claimed to have.

“So then, I watched Adam Schiff at the Chairman of a committee, of a committee that gets to see items that other members do not– get to see the top-secret of things happening, read to the American public when all eyes were watching on a transcript,” Mccarthy continued. “And he lied about what was in it then. So when he looks at me and I watched him on television that time and he said, ‘Oh, he wished he knew who the whistleblower was’. Why didn’t he say, ‘Oh, my staff met with them.’ I think that would have been appropriate at the time, would it not?” (Continued Below)

McCarthy went on to say, “So why would he ever question us about not believing him? Shame me once, shame on me. Shame me twice, shame on me. Because that’s exactly what he has done. He has lied to the American public three different times. And you still put him in charge?”

“If the whistleblower has met with his staff, they are fact witnesses. But we now put them in charge. And what did they do? They wrote the rules that not only are they prosecutor, which nowhere in our judicial system would allow a fact witness to be prosecutor, but he is the judge. He was questioned by [Rep.] Elise Stefanik– was he gonna interrupt and direct the witnesses that he got to pick, not the Republican witnesses that he denied– not to answer the Republican’s questions like he did down in the basement when the public could not see. Well, what did we find? In less than 20 minutes, he exactly did that same thing. So now he thinks he is the judge and also jury. Nowhere in America would we put someone like that in charge,” he said.

“Nowhere would I believe in the Republican conference– would we allow someone who has continued to lie to the American public, in charge of the Intel committee. Nowhere in America would we take it out of the judicial system into the intel committee and make it the impeachment committee and then, change the rules– that members of their own committee cannot ask questions until Adam Schiff gets his 45 minutes. And then, Adam Schiff can decide whether he needs another 45. He was asked at the start, would he decide after the first 45 that the members could actually have their 5 minutes. He said, ‘We’ll wait and see.'” McCarthy explained.

“So yes, I think Adam Schiff has lied ‘numerous’ times. I do not think Adam Schiff is fit to be in this position of running the Intel Committee, and that’s only a decision by one person, who can put them in there. And yes, I do believe Adam Schiff has spent his entire time in Congress since the president got in, trying to impeach him. And, I think he’s already written a script. He auditioned the individuals in the basement, and he’s picking and choosing who to come forward,” he stated. (Video Below)

“Why don’t we take him at his own word? Would [Ukranian President Zelensky] have lied when he came to us in America? [Wouldn’t he have] said, ‘He’s so concerned that the administration was withholding?’ Then, [Schiff’s] gonna fight for this whistleblower to come forward– that they wanted to move legislation on the floor. Did he lie to us then? Now he doesn’t want to bring the whistleblower forward. Would that be a lie? I think that’s a question for Adam Schiff,” the House Minority Leader concluded.

(Related: Schiff Denies Knowing The Whistleblower’s Identity As Jordan Urges Them To Testify: “This Is A Sad Day For This Country”)