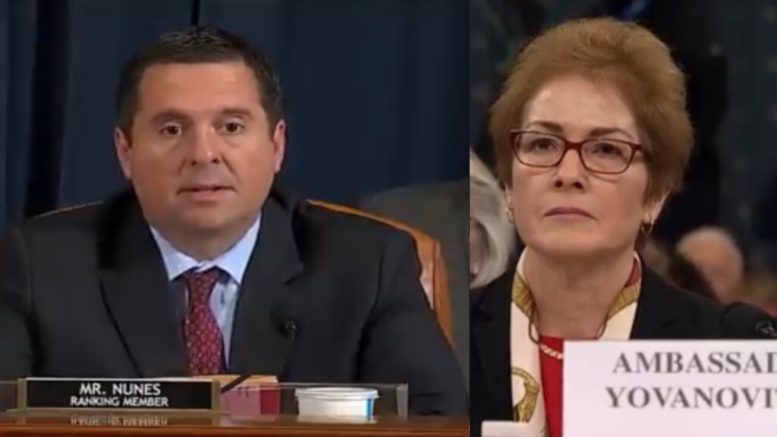 During the second Democrat-led impeach inquiry hearing, Ranking Member of the House Intel Committee, Devin Nunes (R-CA), wondered why the committee was hearing testimony former Ambassador of the United States to Ukraine, Marie Yovanovitch, saying that an employment disagreement with the Trump administration seems more appropriate for the sub-committee on Human Resources at the Foreign Affairs Committee.

Nunes asked a few questions, however, then tried to yield his remaining time to Rep. Elise Stefanik (R-NY), to which, House Intel Chairmen Adam Schiff, immediately stopped the New York Congresswoman to say she was not recognized and that Nunes can only yield time to minority counsel.

“Ambassador, I’d like to congratulate you. You’ve been down in the secret deposition meeting rooms, you’ve graduated for your performance today. Later this afternoon, I should note that to the public that we will back down in the basement of the Capitol doing more of these secret depositions,” Rep. Nunes said.

He explained that he didn’t have very many questions for Yovanovitch, as she admitted in her opening statement that she does not have any first-hand knowledge of the issues that the committee is looking into.

“I’m not exactly sure what the Ambassador is doing here today. This is the House Intelligence Committee that’s now turned into House impeachment committee. This seems more appropriate for the sub-committee on Human Resources at the Foreign Affairs Committee if there are issues with employment disagreements with the administration. And it would seem like this would be a more appropriate setting, instead of an impeachment hearing where the Ambassador is not a material fact witness to anything– any of the accusations that are being hurled at the president for this impeachment inquiry,” Rep. Nunes explained.

Nunes then proceeded to yield his remaining time to Rep. Elise Stefanik but was shut down by judge, jury, and prosecutor Chairman Schiff with his power-hungry gavel. “What is the interruption for this time? It is our time. The ranking member yielded time to another member of Congress,” she insisted. “This is the 5th time you have interrupted duly elected members of Congress.”

“Mr. Chair, we control the time. It’s been customary that in this committee whoever controls the time can yield to whoever they wish. If we have members of Congress that have a few questions, it seems appropriate that we be able to let Ms. Stefanik ask her questions,” Rep. Nunes said. (Video Below)

Schiff responded, “Mr. Nunes, you or minority counsel are recognized.”