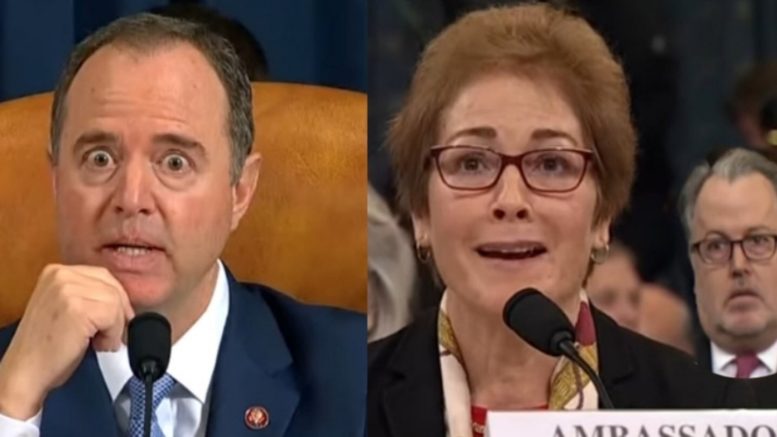 During the second Democrat-led impeach inquiry hearing Friday, House Intel Chairman, Adam Schiff (D-CA), took an opportunity to let everyone know that the President tweeted about former US ambassador to Ukraine, Marie Yovanovitch, let her respond, and claimed it was “witness intimidation”.

President Trump tweeted while the testimony was starting, describing that Yovanovitch “serves at the pleasure of the President” and that “everywhere Marie Yovanovitch went turned bad”.

The Commander in Chief wrote on Twitter Friday, “Everywhere Marie Yovanovitch went turned bad. She started off in Somalia, how did that go? Then fast forward to Ukraine, where the new Ukrainian President spoke unfavorably about her in my second phone call with him. It is a U.S. President’s absolute right to appoint ambassadors.”

“They call it ‘serving at the pleasure of the President.’ The U.S. now has a very strong and powerful foreign policy, much different than proceeding administrations. It is called, quite simply, America First! With all of that, however, I have done FAR more for Ukraine than O,” he added.

During the hearing, however, Rep. Schiff read of a partial piece of the President tweet, then pushed Yavonavitch to respond publicly to President Trump’s tweet, to which she proceeded. “Would you like to respond to the president’s attack that everywhere you went turned bad?” he pressed.

“I don’t think I have such powers. … I actually think where I’ve served over the years, I and others, have demonstrably made things better. …. Ukraine for example, there are huge challenges, including on the issue that we’re discussing today of corruption. But they’ve made a lot of progress since 2014, including in the years that I was there. And in part, I think the Ukrainian people get the most credit for that, but a part of that credit goes to the work of the United States and to me, as the Ambassador in Ukraine,” Yovanovitch stated. (Continued Below)

That was not what Shiff wanted to hear and so he responded: “Ambassador, you have shown the courage to come forward today and testify. Notwithstanding the fact you were urged by the White House or State Department not to, notwithstanding the fact as you testified earlier the president implicitly threatened you in that call record. And now, the president in real-time is attacking you. What effect do you think that has on other witnesses willingness to come forward and expose wrongdoing?”

“It’s very intimidating,” she claimed, to which Schiff asserted that what the President was doing was “designed to intimidate”, then asked her if that’s what he was doing. She replied, “I can’t speak to what the president is trying to do, but I think the effect is to be intimidating.”

“Well, I want to let you know Ambassador, some of us here, take witness intimidation very, very, very seriously,” Schiff said. (Video Below)

….They call it “serving at the pleasure of the President.” The U.S. now has a very strong and powerful foreign policy, much different than proceeding administrations. It is called, quite simply, America First! With all of that, however, I have done FAR more for Ukraine than O.

(Related: While Questioning Yovanovitch, Nunes Expresses Why The Cmte Is Wasting Their Time Without A “Fact Witness”)