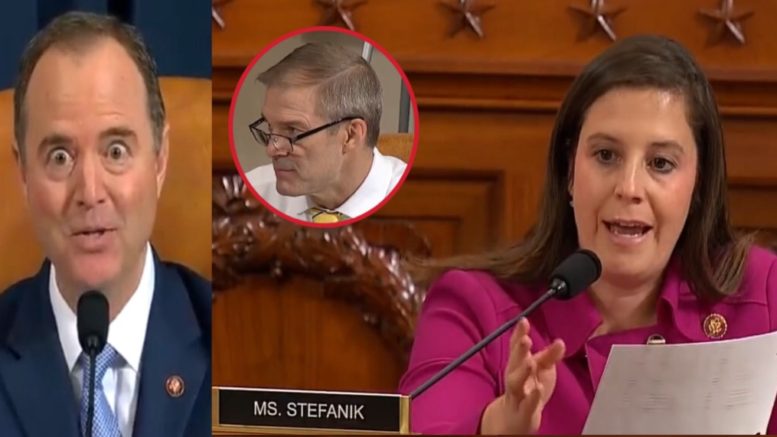 Friday, during the second day of a Democratic-led House impeachment inquiry, Rep. Elise Stefanik (R-NY) stood up to House Intel Chairman, Adam Schiff (D-CA), citing Schiff’s quotes from several news reports and television appearances–where Schiff said that the anonymous whistleblower would, in fact, testify before his panel. She also referred to the “abuse of power” in the proceedings by Schiff and the Democrats to support her assertion.

Schiff has since backtracked, and denied requests from Republicans for the whistleblower to come forward and testify, calling the potential testimony “redundant” and “unnecessary”.

“Since the Chairman has ‘gaveled out’ all of my colleagues with their unanimous consent, I am going to read for the record many of the chairman’s comments in September of the importance of hearing from the whistleblower,” Rep. Stefanik announced during her allotted time to question former U.S. Ambassador to Ukraine, Marie Yovanovitch.

The New York Congresswoman then read aloud several publications that quoted Schiff’s own words when he paraded around television shows to announce the whistleblower would testify publicly.

“As we know, it’s import to protect whistleblowers from retaliation and firing, but in this case, the fact that we are getting criticized for statements he, himself, made earlier in the process shows the duplicity and just the ‘abuse of power’ we are continuing to see,” Rep. Stefanik explained.

The following are the news articles Rep. Elise Stefanik cited:

We leave you with a tweet from President Donald Trump where he pokes fun at Schiff: