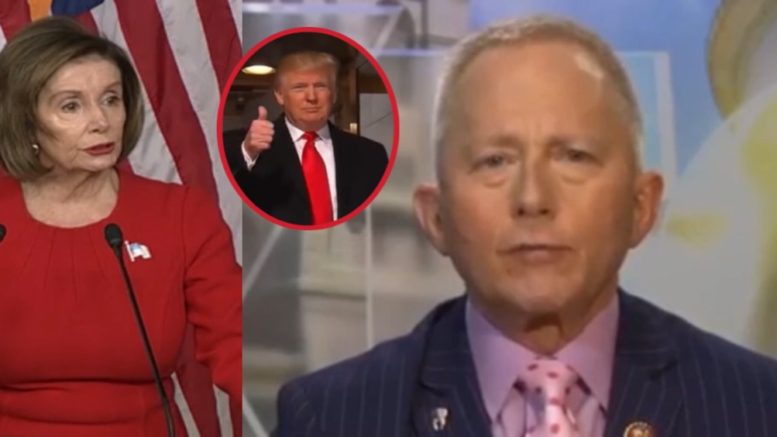 Rep. Jeff Van Drew (D-NJ) spoke with host Maria Bartiromo on Fox News’ “Sunday Morning Futures” where he disclosed why he will not be voting for impeachment with the rest of his party.

Bartiromo told Van Drew that he has had such “courage and leadership” since he took the job in Congress, and noted that he is also one of two who voted against the Democrat’s impeachment inquiry.

Asked during the interview on Sunday why he voted against the Democrats’ inquiry, Rep. Jeff Van Drew explained: “I just think we keep going down this road, spending more time– you know, many of us came to Congress because we really wanted to accomplish goals, really want to work on issues such as health care, work on issues dealing with prescription drugs, election security, the debt, the deficit, the list goes on and on. I can speak on and on about all the things that we need to do.”

“I just don’t think we’re hearing anything new,” he clarified. “And real quickly, we must understand the importance and level of what impeachment is. Hundreds of years of history, no one has ever been convicted of impeachment. And that’s the point. We’re gonna have an election next year, let’s have the election, let’s fight through the election and do what Republicans and Democrats and whomever else does.”

“But this is gonna get us nowhere. We’ve spent millions of dollars in my opinion– tons of money, tons of time, tons of hurt– fraction the nation apart. I haven’t seen this to be a good thing and now, we’re dealing with all sorts of technical issues. Most Americans don’t even understand some of these technical issues, and they just don’t know really what to think,” said Rep. Van Drew.

Asked if he is poised to vote “no” on impeachment if the House votes, that is said to be in December, the New Jersey congressman responded, “I would imagine I will be voting ‘no’. Now I always have a codicil if there is something new, something we haven’t heard, something that really rises to the level of treason or you know, a high crime, that would be different. But we don’t see that. We see little variations– hearsay, discussions somebody heard something somebody else said.” (Continued Below)

“Our founding fathers had vigorous debates on whether they would even allow impeachment in the Constitution. You don’t disenfranchise voters, millions upon millions of voters. Voters choose their leaders in America,” Van Drew pointed out.

Asked if he is hearing from some of his colleagues in states that President Trump won, that they may also vote ‘no’, and whether he is hearing any concern amongst his Democratic colleagues or if he’s a lone wolf in all of this, the New Jersey congressman said, “I don’t know how other folks will vote because in all honesty, originally, I thought there were going to be a few more– not that it matters to me if I’m one or I’m a hundred and one. I do what I believe is right.”

“But there is some discussion among some of them quietly, privately of concern, certainly. What I’m hearing out in the street with most people is: they’re kind of tired, kind of worn out, kind of bored, most folks. And they really want to move on unless there is something new and amazing. We know the end game here,” he added. (Video Below)

Rep. Lee Zeldin (R-NY) praised his fellow colleague and expressed, “We really need more people with his attitude in the House of Representatives. It’s really important we get more done.”