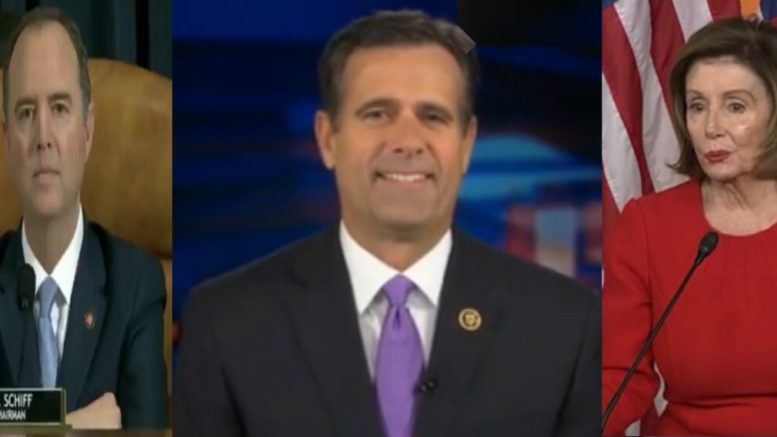 Congressman John Ratcliffe (R-TX) spoke with host Maria Bartiromo on Fox News’ “Sunday Morning Futures” where he summarized what happened over the past week with the Democrat-led impeachment inquiry hearings. He also weighed in on the timing of the upcoming FISA report, which will be released from Inspector General, Michael Horowitz, reportedly within the next couple weeks.

“Let’s summarize: we heard from three witnesses this week. None of those three witnesses have met or spoken with President Trump in the last year. None of them were on the July 25th call in question. None of them have first-hand information of that call. … None of them are aware of a criminal activity or impeachable offense. If you only get to make a first impression, I think the impression to the American people is… what is this about and why are we here? What is Congress wasting our time with, on yet another effort to frame the President for something else he didn’t do?” Rep. John Ratcliffe asked.

Asked about the process of the transcripts being released to the American people of the witnesses who testified before closed doors in the basement of the Capitol, the Texas Congressman explained: “The process is whatever the process will be that day. Think of this way: if you’re accused of a crime, you show up and the person who’s accused you is in charge of the trial. [Schiff] decides what witnesses are gonna be called, the order they’re gonna be called in, how much they’ll be allowed to testify, who will be allowed to ask them questions. That’s what Republicans are dealing with, and I think the American people see that.”

He noted that the rules change every day, the testimony changes, along with the alleged “crimes” that the President is accused of. “Just in this past week, this was all about a quid pro quo, to this was about extortion, to this about bribery. So we don’t know what the crimes are gonna be. …Regardless of what they say about the crime and what it ultimately is, there’s no victim for the crime. The alleged victim, President of the Ukraine, has said there was ‘no pressure, no conditions, no demands, nothing improper, it was a good call, I was happy with the call’. So, you have no crime, and you have no victim. That’s the worst impeachment trial ever.”

Maria Bartiromo displayed a letter that House Speaker Nancy Pelosi (D-CA) wrote to her colleagues in September, claiming that the administration needs to stop blocking the whistleblower, but noted that House Intel Chairman, Adam Schiff (D-CA), says now that he does not want to speak to the whistleblower.

“Right. So what we keep getting are parading through one Ambassador or diplomat after another, who doesn’t know the president, hasn’t spoken to the president, doesn’t know what either president really thinks about what happened. And we’re not hearing from the most important witnesses. The most important witnesses are the whistleblower, who started this. Adam Schiff, who met with the whistleblower, that got this started, and Hunter Biden, whos testimony became indispensable this week when we learned that it wasn’t a ‘sham’ as Chairman Schiff said to be asking questions about that,” Ratcliffe said. (Continued Below)

He noted during the hearings this week, witnesses admitted that the Obama State Department was concerned about Hunter Biden’s role on Burisma and they prepped Marie Yovonovitch before her Senate confirmation, in case questions were asked about Hunter Biden.

“We heard from Ambassador Yovonovitch and Mr. Kent, who both said they thought it ‘presented a conflict of interest’. When Republicans ask questions about that, we’re gaveled down. … The Democrats want to send this to the Senate without testimony from the most important witnesses,” Ratcliffe explained. [Yovonovitch’s] testimony– there are thousands of companies in Ukraine, and in preparation for her [Senate] confirmation hearing, the Obama/Biden State Department briefed her on ‘one company’: Burisma. The company that was paying Joe Biden’s son obscene amounts of money. A company that was being investigated and the prosecutor, who was investigating that was fired six hours after Joe Biden demanded that he be fired.”

Ratcliffe said President Trump has every right to take care that our laws are faithfully executed. “The Hunter Biden contract presents a prima fascia case of corruption on its face. And it’s totally appropriate for us to be looking at that relationship. We ought to have that testimony in an impeachment trial that relates to questions about investigations,” he suggested. (Video Below)

Bartiromo believes that Democrats are trying to “railroad” impeachment through the House before the Inspector General report comes out, which looks at the origins of the Russia probe, then played a clip of Senator Graham, who said last Sunday, “It’s impossible to bring this case forward, in my view fairly, without us knowing who the whistleblower is and having a chance to cross-examine them about any biases they may have. So, if they don’t call the whistleblower in the House, this thing is dead on arrival in the Senate.”

Ratcliff responded, “It means this is a waste of time. I think the Democrats know that. … This is dead on arrival without fairly looking at the most important witnesses. They don’t want the whistleblower to come in because it is now been discovered that Chairman Schiff’s office coordinated for that person to become the whistleblower. The other thing that Chairman Schiff hasn’t done, you talk about witnesses and transcripts, he hasn’t released the ‘inspector general’s transcript’– the first transcript of the first witness.”

He explained that the first transcript will “tell you what the inspector general knew and didn’t know about the relationship between Chairman Schiff and the whistleblower, based on what Chairman Schiff did or didn’t reveal to the inspector general,” adding, “This is such an unfair process. I think everyone sees that Republicans are dealing with an inquiry where we have not just one, but two hands tied behind our back. But despite that, the Democrats are still losing.”

Asked if members of Congress are under oath such as Adam Schiff, Rep. Ratcliffe said, “Yeah. He’s not sworn in as a witness as we preside over these hearings, or he presides over these hearings. Much of what he is saying to the American people is just not true and I know it’s not true. We would like him to testify.” (Continued Below)

Asked when does he expect the IG report and what should we expect, the Texas Congressman said, “I think it’s going to be the first week of December. Bill Barr said it’s imminent. I would love if he came out sooner because to your earlier point Maria, the Democrats are ‘racing to get through this impeachment as quickly as possible’. That’s why we 8 witnesses and 5 hearings this week and we’re not doing any of the work is because they know that inspector general report is likely to be damning about the origins of the 2016 investigation into the Trump campaign, the role that the Obama-Biden administration officials played in that.”

“Look, we know this. The report is supposedly 500 pages. ‘It doesn’t take an inspector general 500 pages to say that everything was done correctly and properly’. And I can’t tell you everything that’s in there, but what I can tell you is that I know that the inspector general’s going to have to find that there were things that were done wrong– there was exculpatory information that wasn’t provided to the FISA court. I think it’s going to be an indictment of Adam Schiff, who has written his own FISA rebuttal memo– saying, ‘How dare Republicans criticize people like Peter Strzok, Lisa Page, Andy McCabe, and Bruce Ohr who have done nothing wrong’. I think that the IG report is gonna find that there were problems in the FISA application process and they don’t want that to come out until ‘after’ they’ve impeached the President,” Ratcliffe said.

“I think the IG report is going to validate– at the time Chairman Nunes’ FISA memo, that highlighted the abuses. Look, I can tell you this: I can’t tell you what the exculpatory information is that relates to George Papadopolous, but there was some. And, I can tell you that it was not timely delivered to the FISA court during the pendency of those FISA applications. And I’ll promise you that the inspector general report is going to address that. That’s just one thing,” he explained.

“Nancy Pelosi and Adam Schiff are racing to get this done, that’s why we have 5 impeachment hearings this week with 8 different witnesses. They’re racing the clock, they want to get this done before information comes out– the damages of the Obama-Biden administration and their efforts to frame Donald Trump comes out, and the IG report, or from the John Durham’s criminal investigation, into those very same issues,” the Texas Congressman revealed. [Emphasized].