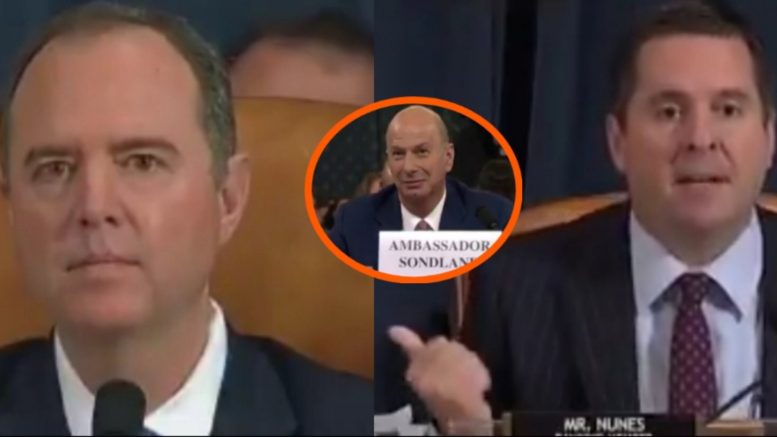 Schiff specifically told reporters that Sondland said that there was a quid-pro-quo deal between President Trump and Ukrainian President  Zelensky.

“Just want to make a couple quick observations while we’re on a break here because I think today’s testimony is among the most significant evidence to date. And what we have just heard from Ambassador Sondland is that the knowledge of this scheme, this conditioning of the White House meeting of the security assistance to get the deliverable the President wanted, these two political investigations that he believed would help his reelection campaign, was a basic quid-pro-quo,” Schiff told reporters.

“It was the conditioning of official acts or something of great value to the President, these political investigations– it goes right to the heart of the issue of ‘bribery’, as well as other potential high crimes or misdemeanors. … This goes to only underscore just how significant the President’s obstruction of this investigation has been. We now can see the veneer has been torn away,” he claimed.

Upon his return to the hearing, House Intel Ranking Member, Devin Nunes (R-CA) slammed Schiff for his desperate attempt to run to reporters during the break.

“For those of you watching at home, that was not a bathroom break, that was actually a chance for the Democrats to go out and hold a press conference Ambassador, for all the supposed bombshells that were in your opening testimony,” Nunes announced. (Videos Below)

Sondland confirms that the Ukraine scheme was a quid pro quo: the conditioning of official acts, a WH meeting and military aid, for something of great value to the president.

It goes right to the heart of the issue of bribery, and other potential high crimes and misdemeanors. pic.twitter.com/FGOiviza85

Could be mistaken, but I don't remember Adam Schiff previously using a break in the hearing to hold a presser outside.

He sure wanted to clarify the convoluted testimony of the witness & try to resuscitate the impeachment narrative.

Sorry, but it's not working across America. pic.twitter.com/v4lwkmlTKd