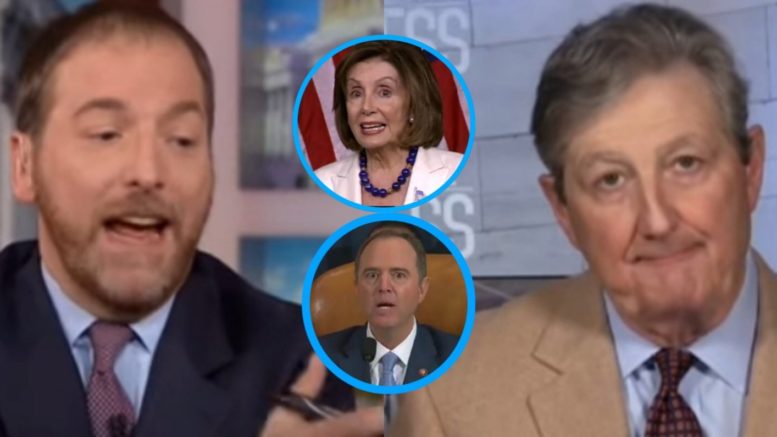 Senator John Kennedy (R-LA) spoke with host Chuck Todd on NBC’s “Meet The Press” Sunday where they discussed Democrats’ impeachment efforts and Ukraine meddling in the 2016 election, as reported by several news outlets.

Senator Kennedy believes that both Russia and Ukraine meddled in the 2016 election as news sources have well documented Ukraine’s efforts. He named off several news sites who wrote about Ukraine’s meddling and explained that a DNC operative also met with Ukraine officials.

Ukrainian government officials tried to help Hillary Clinton and undermine Trump by publicly questioning his fitness for office. They also disseminated documents implicating a top Trump aide in corruption and suggested they were investigating the matter, only to back away after the election. And they helped Clinton’s allies research damaging information on Trump and his advisers, a Politico investigation found, Politico reported.

A Ukrainian-American operative who was consulting for the Democratic National Committee met with top officials in the Ukrainian Embassy in Washington in an effort to expose ties between Trump, top campaign aide Paul Manafort and Russia, according to people with direct knowledge of the situation, per Politico.

“In December 2018, a Ukrainian court ruled that Ukranian officials had violated Ukrainian law by meddling in our election and that was reported in The New York Times,” Senator Kennedy said.

Chuck Todd said that Senators were briefed by the intelligence after Fiona Hill’s testimony and suggested that the “Ukraine meddling” is an “effort of Russia propaganda”– adding, “That is a Russia intelligence propaganda campaign in order to get people like you to say these things about Ukraine– to frame Ukraine. You apparently were briefed about this in the United States Senate by intelligence officials. Are you at all concerned you’re doing Russian intelligence work?” (Continued Below)

Senator Kennedy responded, “I was not briefed. Dr. Hill is entitled to her opinion,” adding that he believes the reporting from Politico. … “I didn’t report those facts. Reputable journalists reported those facts. Does that mean that the Ukrainian leaders were more aggressive than Russia? No. Russia was very aggressive. … But the fact that Russia was so aggressive, does not exclude that fact that President Poroshenko actively worked for Secretary Clinton”.

Todd was visibly frustrated at Senator Kennedy’s response and tried to deflect. “You realize the only other person selling this argument outside the United States is Vladimir Putin. … You’ve done exactly what the Russian operation is trying to get America politicians to do. Are you at all concerned that you’ve been duped?”

“No. Because, just read the articles,” Senator Kennedy urged. (Continued Below)

“Do you think there’s a difference in criticizing a presidential candidate who essentially endorsed another countries invasion and annexation of a part of their country as equivalent to what Russia did to the DNC?” Todd then asked.

“Let me put it this way, Chuck: let’s suppose I don’t believe it, but you’re right and I’m wrong. Then what harm would it do to allow the President of the United States, who has a demonstrated record fighting foreign corruption, to introduce evidence?” Senator Kennedy asked.

Todd claimed the President has been provided the chance to provide evidence and asked: “Why doesn’t he?”

“No, he hasn’t. Rounds one and two by Speaker Pelosi and Chairman Schiff are as rigged as a carnival ringtoss! Senator Kennedy fired back. “And we both know that. If I were a prosecutor and I was prosecuting you for a felony and I went to a federal judge and I said, ‘Judge, we both know Chuck’s guilty. So let me call witnesses, give me an order than he can’t call witnesses, he can’t cross-examine my witness, he can’t offer any rebuttal evidence, his lawyer can’t even be there. You know what that federal judge would do? He’d either put me in handcuffs or he’d put me in a straightjacket. .. And that’s what happened here.” [Emphasized]. (Video Below)

“Nobody is above the law, but nobody is beneath the law. And the Bill of Rights is not an ala cart menu. It’s not,” the Louisianna Senator added.

(Related: Sen. Kennedy On Whether Calling Nancy Pelosi “Dumb” Was Too Much: “I Do Think What I Said Was Accurate”)