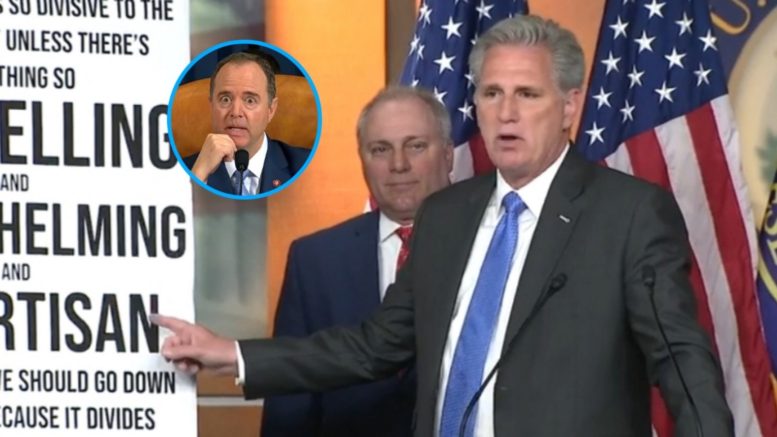 Hours before, House Intel chair Adam Schiff (D-CA) got in front of the cameras after his committee released a report implicating President Trump in the impeachment inquiry. Republicans, however, released their 123-page report on Monday evening.

“Even though the Congress looks like they’re divided, there is something the Speaker has said,” House Minority leader Kevin McCarthy announced. “Just this year, that I think unites the entire nation. What she said, I think almost everybody agrees with.”

McCarthy pointed to a prop beside him with House Speaker Nancy Pelosi’s exact quote from an interview with The Washington Post on March 11, 2019, and then he read aloud: “Impeachment is so divisive to the country that unless there’s something so compelling and overwhelming and bipartisan, I do not think we should go down the path because it divides the country.” 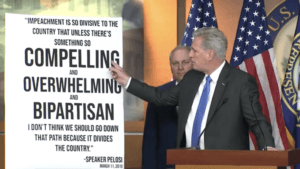 “I imagine most everyone in America believes that impeachment is so divisive,” McCarthy continued. “But if we were to do it, it would have to be compelling, overwhelming and bipartisan–three criteria’s the Speaker laid out to this country to move what is gonna happen this week. Those three issues she laid, have failed each one.” (Continued Below)

He noted there is “nothing compelling, nothing overwhelming, and the only bipartisan vote we have had in this House is not to move forward with an impeachment inquiry”, adding that it has not stopped the Democrats.

McCarthy explained that Adam Schiff held a press conference earlier in the day and was asked if he would vote for impeachment. “It’s interesting because Adam has a hard time with the truth. Because Adam said just a few days ago in his words, ‘he is going to send the president back to the golden thrown he came from’. Adam had made his mind up long before. He just didn’t have the proof so he had to write his own story,” the GOP leader explained.

“If you read his report, he only picks what he wants and he still does not have anything overwhelming, compelling, or bipartisan. But that does not stop him from continuing to make items up,” he added. (Continued Below)

The House Minority Leader also pointed out that House Judiciary Chairman Jerold Nadler campaigned on impeaching the president. However, Nadler admitted last year, “If you’re serious about removing a president from office, what you’re really doing is overturning the results of the last election.”

“Many of the Democrats have been very honest about this–from Al Green, who put the impeachment long before they were even in the majority– before any Mueller report came forward. 2/3 of the Judiciary Committee on the Democratic side had voted for those,” McCarthy said.

“They’re concerned if they do not impeach this president, they can’t beat him in an election. This is exactly what Alexander Hamilton warned us about. And unfortunately, we now have a majority solely devised on one goal. But that one goal harms the entire nation. The Speaker said it. It’s very divisive. But what is harming is what’s not getting done,” he added.

Before concluding and taking questions from the press, the Minority leader asked a question of the Speaker: “When will we get [USMCA], … the funding bill to fund our troops for the department of defense, and more importantly, how have we been able to help to make our country stronger, more prosperous since taking the gavel?” McCarthy asked. (Video Below)

“My real question that I think the America public would ask this new majority: name me one problem you have solved? Because they have issued more subpoenas than they’ve created laws. We’re better than this, and I hope the Speaker meant the words she said on March 11,” he expressed.

“If [Pelosi] set a criteria to have to march forward, she needs to answer the question: What is compelling, what is overwhelming, and where is the bipartisanship? Because that would put an end to this nightmare where we could work forward to make America stronger,” the GOP leader concluded.

(Related: Rep. Collins On The Formal Impeachment Hearing: “My First And Foremost Witness Is Adam Schiff”)