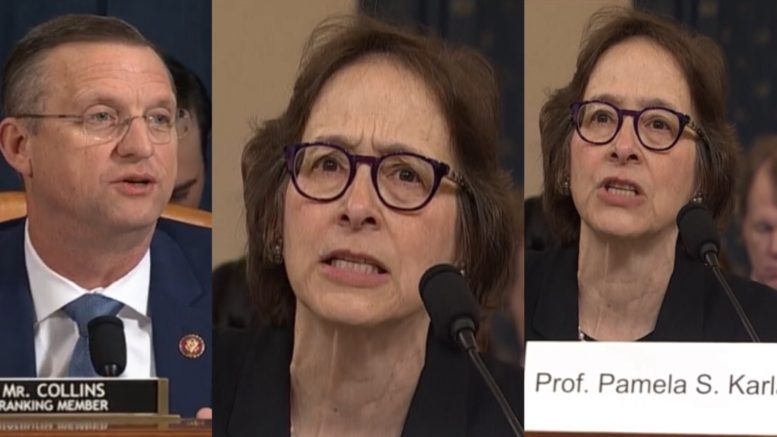 Wednesday in the Democratic-led House Judiciary Committee, a hearing titled “The Impeachment Inquiry into President Donald J. Trump: Constitutional Grounds for Presidential Impeachment” took place with 4 “Constitutional scholars” who testified. 3 of the 4 witnesses were Democrats.

Ranking member, Rep. Doug Collins (R-GA), in his opening, made the case that it was essentially a waste of time for the “law professors” to be testifying before the committee as they could not have “digested” Adam Schiff’s report or the Republican’s report in its entirety, which was released the day before.

“What is really interesting today and for the next few weeks, is America will see why most people don’t go to law school– no offense to our law professors,” Rep. Doug Collins said in his opening statement Wednesday.

“But please. Really? We’re bringing you in here today to testify on something most of you have already written about, all four– for the opinions that we already know, … to discuss things that you probably haven’t had a chance– unless you’re really good on TV or watching the hearings over the last couple weeks, you couldn’t have possibly actually digested the Adam Schiff report from yesterday, or the Republican response in any real way,” the ranking member suggested.

In her opening, however, Professor Pamela Karlan put her aggravation with Rep. Collins on full blast as she claimed that she “had read all of the witness depositions from the House Intelligence Committee over the Thanksgiving holiday”. Coincidently, the witness list wasn’t announced, however, until this Monday. Collins’ argument specifically, was that the witnesses could not have possibly read the “reports” from Schiff and the GOP, before Wednesday’s hearing. (Continued Below)

“Today you’re being asked whether protecting those elections requires impeaching a president. That is an awesome responsibility. But everything I know about our Constitution and it’s values and my review of the evidentiary record, and here, Mr. Collins, I would like to say to you, sir, that I read transcripts of every one of the witnesses that appeared in the live hearing. Because I would not speak about these things without reviewing the facts,” Professor Karlan lashed out.

(Related: Mike Huckabee Responds To Prof. Karlan’s ‘Outraged’ Testimony Against Trump: “Thank You Dems For Being DIM… And DULL”)

“I’m insulted by the suggestion that as a law professor, I don’t care about those facts,” she vented, as she missed Rep. Collins point, in that she or the other witnesses did not have time to read Schiff’s report or the GOP report. (Video Below)