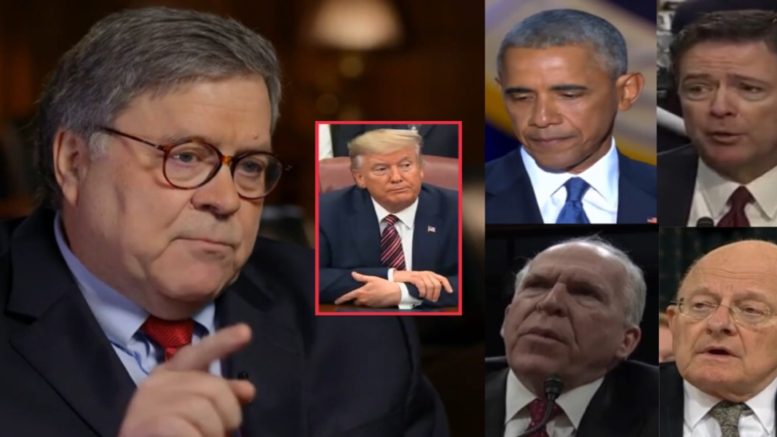 In an interview with NBC News, Attorney General William Barr stated that he still believes the FBI may have operated out of “bad faith” and insists the FBI acted improperly by continuing the investigation after Donald Trump took office. Further, he confirmed that he stood by his statement that the Trump campaign was “spied upon.”

After the release of the Department of Justice’s inspector general report pertaining to FISA abuse, Barr promptly issued a scathing response saying, “The Inspector General’s report now makes clear that the FBI launched an intrusive investigation of a U.S. presidential campaign on the thinnest of suspicions that, in my view, were insufficient to justify the steps taken.”

During his interview with NBC News, Barr dismissed the idea of Inspector General Michael Horowitz’s notion that there was no evidence of political bias in the launching of the Russia probe, suggesting that U.S. Attorney John Durham will essentially have the last word on the matter.

Asked why he believes the FBI opened the investigation of the Trump campaign on the thinnest of suspicions, the Attorney General said: “I’m glad to get into the idea of predication, but let me just start out by saying that I think you have to put this in context. I think the heart of the IG’s report really focused on how the investigation was conducted, once it got going. And that is especially the very serious abuses of FISA that occurred, much of which has been in my view, not accurately reported by the press over the last day.”

“But, in one area I do disagree with the IG and that was whether there was sufficient predication into opening a full-blown counterintelligence investigation, specifically using the techniques that they did to collect intelligence about the Trump campaign” AG Barr explained.

Barr portrayed the Russia investigation as a bogus endeavor that was foisted on Trump, rather than something undertaken by career civil servants who were concerned about whether a foreign power had compromised a political campaign, as per NBC News. (Continued Below)

“From a civil liberties standpoint, the greatest danger to our free system is that the incumbent government use the apparatus of the state … both to spy on political opponents but also to use them in a way that could affect the outcome of an election,” Attorney General Barr said, adding that this was the first time in history that “counterintelligence techniques” were used against a presidential campaign.

“I felt this was very flimsy. Basically, the Department has a rule of reason, which is at the end of the day, what you’re relying on sufficiently powerful to justify the techniques you’re using. And the question there is how strong is the evidence? How sensitive is the activity you’re looking at? And what are the alternatives? I think when you step back here and say what was this all based on? It’s not sufficient,” he continued.

Barr added, “Remember, There was and never has been any evidence of collusion and yet this campaign and the president’s administration has been dominated by this investigation into what turns out to be completely baseless.” (Continued Below)

Inspector General Michael Horowitz, after reviewing a million documents and interviewing 100 people, concluded that he “did not find documentary or testimonial evidence that political bias or improper motivation influenced the decisions to open” the investigations into Trump campaign aides, per NBC News.

Barr argued, however, that Horowitz didn’t look very hard and that the inspector general accepted the FBI’s explanations at face value. “All he said was, people gave me an explanation and I didn’t find anything to contradict it… He hasn’t decided the issue of improper motive,” Barr said. “I think we have to wait until the full investigation is done. And that’s the fundamental distinction what Durham is doing and what the IG’s doing. Durham is not limited to the FBI. He can talk to other agencies. He can compel people to testify.” [Emphasis added].

He noted that former FBI Director James Comey “refused” to sign up back up for his security clearance, and therefore couldn’t be questioned about classified matters. “So someone like Durham can compel testimony. He can talk to a whole range of people, private parties, foreign governments and so forth. And I think that is the point to which a decision has to be made about motivations. And I think right now it would be premature to make a judgment one way or another,” Barr explained. (Video Below)

The Attorney General also confirmed that he stood by his statement that the Trump campaign was spied on, noting that the FBI used confidential informants who recorded conversations with Trump campaign officials.

“Oh, it was clearly spied upon,” Barr stated with certainty. “That’s what electronic surveillance is. I think wiring people up to go in and talk to people and make recordings of their conversations is spying. I think going through people’s emails, which they did as a result of the FISA warrant– they went through everything.” [Emphasized.]

Attorney General Bill Barr: The Trump Campaign “was clearly spied upon. That’s what electronic surveillance is. I think wiring people up to go in and talk to people and make recordings of their conversations is spying. I think going through people’s emails" is spying. #FISAabuse pic.twitter.com/2tLNSsOXIn

(Related: Congressman Jim Jordan: ‘We Now Know It Was Four’ Americans The FBI Spied On)