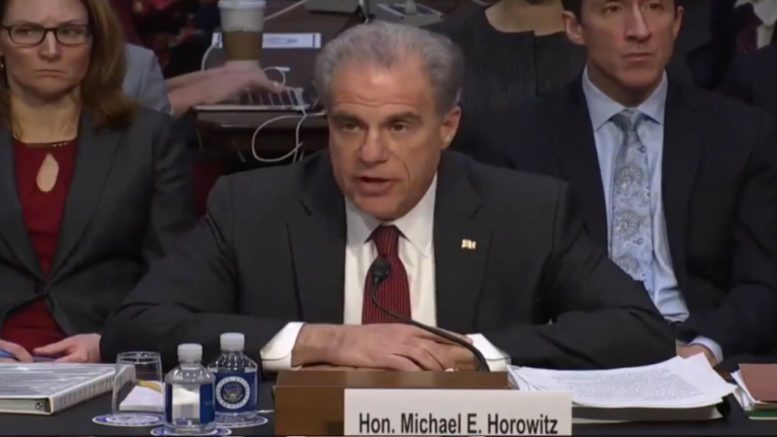 Wednesday in the Senate Judiciary Committee, Department of Justice Inspector General Michael Horowitz testified before the committee pertaining to his findings of the FISA report, which was released on Monday.

During his opening statement, the DOJ watchdog explained why his team decided to refer the FBI’s “entire chain of command” of the Carter Page investigation, for any action it deems appropriate– for further investigation.

“We believe that in the FBI’s most sensitive and high priority matters, and especially when seeking court permission to use an intrusive tool such as a FISA order, it’s incumbent upon the entire chain of command at the organization, including senior officials, to take the necessary steps to ensure they are sufficiently familiar with facts and circumstances supporting and potentially undermining the FISA application when order to provide effective oversight consistent with their level of supervisory responsibility,” Inspector General Michael Horowitz stated.

“Such oversight requires great familiarity with the facts that we saw in this review where time and again during our OIG interviews, FBI managers, supervisors, and senior officials displayed a lack of understanding or awareness of important information concerning many of the problems that we identified,” the DOJ watchdog continued.

(Related: While Grilling Horowitz, Grassley Discovers That ‘A Number Of People’ At FBI Knew Dems Funded The Dossier)

“That is why as you will see in the report, our final recommendation was to refer the ‘entire chain of command’ that we outline here to the FBI and the Department for consideration of how to access and address their performance failures,” he added. [Emphasis added]. (Continued Below)

“We concluded that the FBI’s use of this briefing for investigative reasons could potentially interfere with the expectation of trust and good faith among participants in strategic intelligence briefings, thereby frustrating their purpose. We therefore include a recommendation to address this issue,” the FISA report states on page 22.

The FISA report made nine recommendations to the FBI and the Department to assist them in addressing the issues that the inspector general identified in this review which can be found on pages 22 and 23 under recommendations.

The final recommendation that Horowitz was referring to on page 23 reads: “The FBI should review the performance of all employees who had responsibility for the preparation, Woods review, or approval of the FISA applications, as well as the managers, supervisors, and senior officials in the chain of command of the Carter Page investigation for any action it deems appropriate.” [Emphasis added]. (Video Below)

(Related: AG Barr On Whether He Stands By His Statement That Trump’s Campaign Was Spied Upon: “It Was Clearly Spied Upon”)