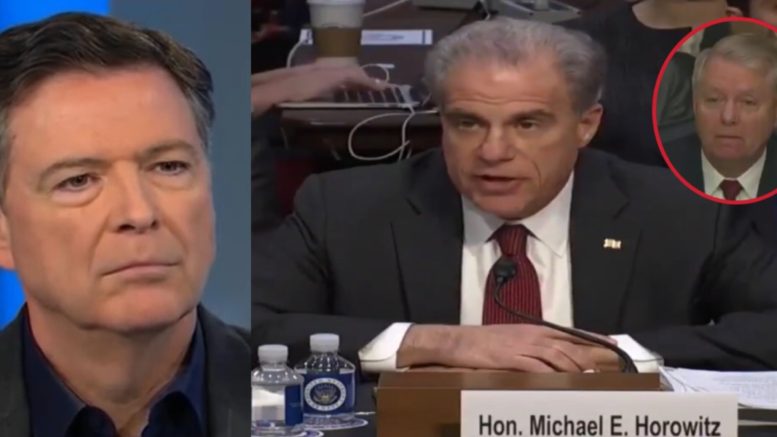 Wednesday in the Senate Judiciary Committee, Department of Justice Inspector General Michael Horowitz testified before the committee pertaining to his findings of the FISA report, which was released on Monday.

During the hearing, the DOJ watchdog vehemently shot down James Comey’s claim that the Inspector General’s report pertaining to FISA abuses “vindicates” the former FBI director.

The chairman had read off a series of statements from the former FBI director, in which Comey called the notion that the FISA process was “abused” nonsense before asking Horowitz if he takes “issue” with Comey’s claim.

Horowitz responded by acknowledging that his investigation has uncovered “significant problems”.

“So when Comey speaks about FISA, you shouldn’t listen,” Graham urged. “You should listen to Mr. Horowitz. He’s not vindicated. And to be concerned about the FISA warrant process is not nonsense.” (Continued Below)

Senator Graham was referring to when after the FISA report was released, Comey took to Twitter to write: “So it was all lies. No treason. No spying on the campaign. No tapping Trumps wires. It was just good people trying to protect America.” Comey also told CNN host Anderson Cooper that he was “vindicated”.

(Related: Senator Cruz Likens FBI’s Tactics To ‘Beavis & Butthead’ When Getting His Turn With Horowitz)

The former FBI Director also included with his tweet, an op-ed he wrote in The Washington Post titled: “James Comey: The truth is finally out. The FBI fulfilled its mission“. (Video Below)

QUESTION: "Former FBI director James Comey said this week that your report vindicates him. Is that a fair assessment of your report?"

So it was all lies. No treason. No spying on the campaign. No tapping Trumps wires. It was just good people trying to protect America. https://t.co/9nurCaIBq2

Here are a few more of Comey’s statements:

Hey James @Comey do you remember what you said back in Dec 2018?

"I think the notion that #FISA was abused here is nonsense"https://t.co/cWChhALGS6 pic.twitter.com/odR4y3ZftT

And, Comey pretended to not know if the dossier was true or not, but he knew that the FBI/DOJ knew this claim to be utterly unfounded as of January 2017. Every media outlet helped him undermine the Trump administration with his lie.

Ex-FBI Director James Comey: “I honestly never thought these words would come out of my mouth, but I don’t know whether the current President of the United States was with prostitutes peeing on each other in Moscow in 2013. It’s possible, but I don’t know” https://t.co/x2m2Uar0yR pic.twitter.com/RzbnP17dSG

In April 2018, Comey appeared on Fox News with Bret Baier. Comey lied to Baier about knowing Christopher Steele’s dossier was funding by the Democratic National Convention and the Hillary Clinton campaign.

The IG report shows that Comey was informed of the funding of the dossier. According to the report, on October 12, 2016, then National Security Division (NSD) Assistant Attorney General Stuart Evans raised concerns to both Comey and Andrew McCabe about the DNC and Clinton campaign funding the Steele dossier.

“When did you learn that the DNC and Hillary Clinton campaign had funded Christopher Steele’s work?” Baier asked, to which Comey said, “Yes, I still don’t know that for a fact.”

“What do you mean?” Baier asked.

“I’ve only seen it in the media. I never knew exactly which Democrats had funded– I knew it was funded first by Republicans,” Comey responded.

“That’s not true, that the dossier that Christopher Steele worked on was funded by Republicans,” Baier said.

Comey further claimed the dossier was “only a part of the investigation”, Horowitz’s report says otherwise.