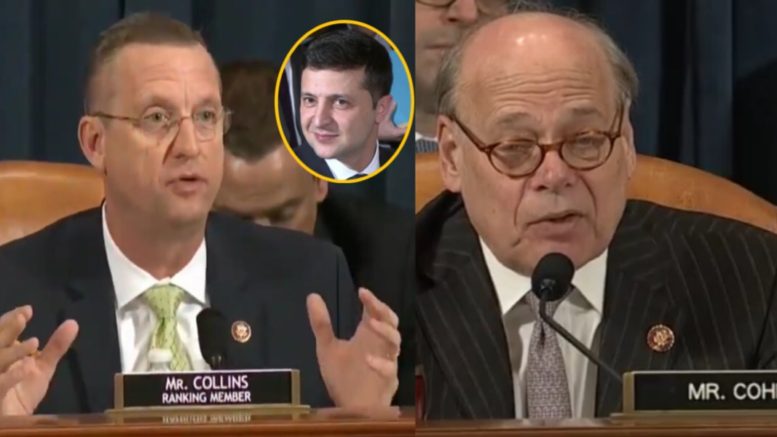 Thursday, during the Democratic-led impeachment inquiry debate in the House Judiciary Committee, Rep. Steve Cohen (D-TN) used his opportunity to suggest that Ukranian President Zelensky is an “actor” and that he is protecting President Trump.

“I took theater and drama when I was in college,” Rep. Cohen said. “I was told the first thing you have to do is have the willing suspension of disbelief.”

He went on to claim that the Trump administration, who was involved in Ukraine meetings, “strong-armed” Ukrainian officials before the July 25 phone call between President Trump and Ukranian President Zelensky, adding that Trump blocked witnesses from later testifying to provide information.

“President Zelensky has no choice– he needs America to protect himself from the big bear, Russia. [Republicans] say he hasn’t said that he felt pressured. Well A, he’s an actor. And B, he’s a politician. And he depends on us, he has no choice. And so, he can’t say that,” Cohen suggested. [Emphasis added].

“This is the most abusive act we can imagine: trying to influence our elections with foreign interference– that takes power away from the American people. And that would end our country as we know it– a Democracy, a shining city on the Hill. [It’s] a beacon of hope to people around the world who followed our Revolution by changing their governments to giving people the power and not Kings. And this is a way to revert back to a King– a man who thinks he can do whatever he wants,” he asserted. (Continued Below)

“When he said, ‘I need a favor though’, he was talking about getting dirt on the Bidens. He feared Joe Biden as his primary policial rival,” Cohen claimed.

“I appreciate so much the gentleman from Tennessee, he just answered a ton of questions for me about his understanding of props and theatrics by his study of drama in his higher education,” Collins said. “Because now, we understand a lot of things. But now, we also have another thing: folks who study drama understand you read the lines, read the transcript.” (Continued Below)

“Stop saying ‘I want you to do me a favor’, it’s not in the transcript! It must be hard to read. I guess ‘me and us’ gets confused when you’re trying to make up facts. … But he also just proved my point, … the moment I saw [Democrats] decided to use ‘abuse of power’. What they did is give their whole conference to make up anything they want and call it ‘abuse of power’, because they don’t have anything else,” Collins argued.

The Ranking Member went on to express: “The last thing that is amazing to me and the gentleman from Tennesee said it: he called Mr. Zelensky a politician and an actor in a derisive way. Basically implying politicians lie. Well, we’ve seen that this morning, even in just talking about how they can’t read a transcript. And he’s an actor?”

“It’s amazing to me, we on this committee are degrading Mr. Zelensky in the eyes of this country and the world because we can’t make a case against this president. This is the tragedy of this impeachment right now is they’re trying to [degrade] because they can’t make the fact [Zelensky] felt pressured. That is a critical element of their case,” Collins declared. (Videos Below)

.@Douglas_Collins calls out Rep. Cohen for making things up: stuff "gets confused when you’re trying to make up facts”https://t.co/Z7VDToHd5x pic.twitter.com/ilZekl7P1s