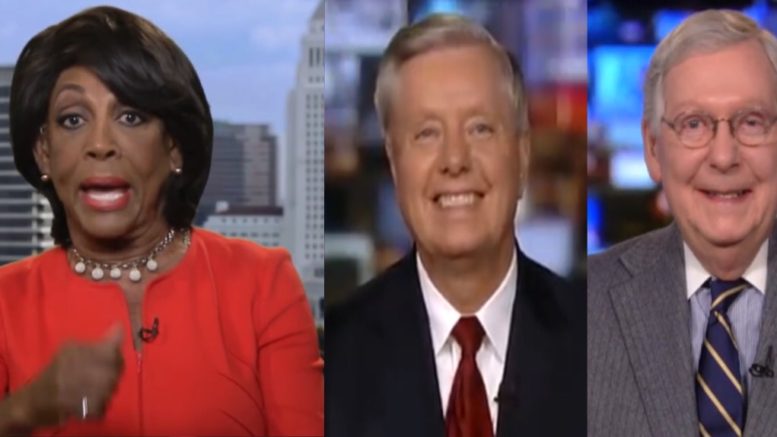 Congresswoman Maxine Waters (D-CA) spoke with host Joy Reid on MSNBC’s “AM JOY” Sunday where she criticized Senate Judiciary Committee Chairman Lindsey Graham (R-SC) and Senate Majority Leader Mitch McConnell (R-KY), suggesting they are “not gonna have rules that are gonna be fair” if the Senate takes up impeachment.

This comes after House Intelligence Committee Chairman Adam Schiff (D-CA) and House Judiciary Chairman Jerry Nadler (D-NY) did not let Republicans call their own witnesses, coached the witnesses, prevented witnesses from answering questions, and refused to give Republicans a minority day, as the House is expected to vote on impeachment this week.

“When we have heard a lot of discussion about abuse of power, this country has not seen anything yet. They’re about to see McConnell and the Republicans run over the Constitution, disregard everybody,” Rep. Waters claimed. “He’s told you in advance that he’s not going to be fair. And so, we’re about to see something worse than this country has ever seen.”

“McConnell is not thinking about what the Democrats want to do or how to involve Democrats in setting up the rules for what is gonna take place in [a] so-called jury trial of the President. They’re gonna run roughshod over us and the presidency will never be the same. … It is terrible, it’s gonna be awful, they’re not gonna cooperate,” Waters vented.

Asked what she tells her constituents about impeachment, Waters replied, “I tell my constituents that the House of Representatives, the Democrats in the House have done their job. The Constitution gives us the responsibility for impeachment when there is a president that is dangerous to this country– when there’s a president who ignores the Constitution, who’s committed high crimes and misdemeanors. We’ve done our job.”

Waters went a step further to declare: “Lindsey Graham is off the scale in the way that he’s thumbed his nose at the American public. They’re telling us that they don’t care what we think. And they’re telling us they’re gonna do what they want to do. They’re not gonna have rules that are gonna be fair, and they’re just gonna run through so-called impeachment jury-inquiry, and they’re not gonna do anything.” (Video Below)

(Related: Maxine Ups The Ante In Her Latest Call For Impeachment, Demands ‘Prison Next’ For Trump)