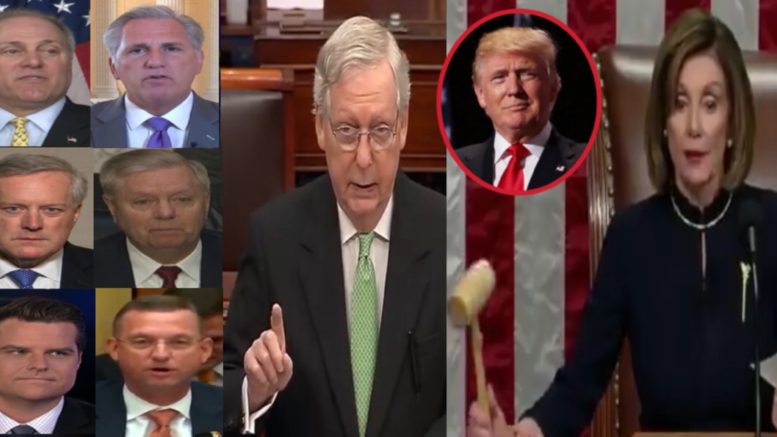 After hours of heated debate on the House floor, the Democrat-majority Congress voted to impeach President Trump for “abuse of power” and “obstruction of Congress” Tuesday evening in relation to the president’s dealings with Ukraine.

The separate votes on the two counts teed up an all-but-certain Senate acquittal, should House Democrats forward the charges to the GOP-controlled chamber. They also fulfilled a promise made by some Democrats ever since Trump’s inauguration to impeach him, even as polls have shown support for impeachment declining, per Fox News.

No Republicans voted to impeach the president on either count, even though House Speaker Nancy Pelosi (D-CA) had vowed earlier this year that impeachment would need to be a bipartisan effort to have legitimacy.

First-term Maine Democratic Rep. Jared Golden, who flipped a GOP seat in 2018, voted yea on abuse of power count but voted no on the obstruction-of-Congress count.

As the House was voting, President Trump was holding a rally in Battle Creek, Michigan where thousands lined up hours in advance. “By the way, it doesn’t really feel like we’re being impeached,” the president expressed at the rally. “The country is doing better than ever before. We did nothing wrong.” (Continued Below)

“Can you believe that I will be impeached today by the Radical Left, Do Nothing Democrats, AND I DID NOTHING WRONG! A terrible Thing. Read the Transcripts. This should never happen to another President again. Say a PRAYER!” the president tweeted Tuesday morning.

“History will judge you harshly as you proceed with this impeachment charade,” Trump wrote in part to Pelosi. (Continued Below)

Senate Majority Leader Mitch McConnell (R-KY) announced he will talk about impeachment at 9:30 am Thursday:

At 9:30am tomorrow morning, on the Senate floor, I will speak about House Democrats’ precedent-breaking impeachment of the President of the United States.

Congressman John Ratcliffe (R-TX) tweeted that he voted, “Hell no”.

If there was ever a time to vote hell no, this was it. pic.twitter.com/pzRPJSEZvq

🚨 BREAKING 🚨 Democrats just signed their own pink slips by voting to undo the results of the 2016 election and impeach the duly-elected President of the United States.

Let's not let them forget what they have done.

House GOP whip Steve Scalise (R-LA) noted: “The only BIPARTISAN vote today was AGAINST- not for- impeachment”.

Every single Republican & some Dems voted against this sham impeachment of @realDonaldTrump.

For the first time in history, the impeachment of a President was completely partisan. What an embarrassment for Dems!

Senator Lindsey Graham (R-SC) tweeted, “President Trump is more likely to be re-elected and the House is in play for 2020!”

Contrary to what @SpeakerPelosi said today — that President @realdonaldtrump gave Democrats no choice but to impeach — THE SQUAD and liberal mob gave Pelosi NO CHOICE.

What does it mean?

President Trump is more likely to be re-elected and the House is in play for 2020!

Today’s vote reveals Democrats’ disregard for the Constitutional protections due to all citizens — including President @realDonaldTrump. That disregard threatens the liberties of every American. pic.twitter.com/SZD1D2kK6W

This is a dark day for the United States of America. History will abhor the Democrats’ radical, vindictive efforts to punish, harass, & remove their political opponent.

I voted NO on both of the Democrats, votes to overturn the 2016 election.

Today will be remembered as the day your House Democrat majority voted to impeach President @realDonaldTrump for a crime they couldn’t find and a case they couldn’t prove.

You won’t forget. And neither will we.

This is the weakest, thinnest, most partisan impeachment in American history.

With no crime, no victim, no evidence, no proof, and no agenda for America, House Democrats’ impeachment charade has followed no rules, and adheres to no sense of honor.#ImpeachmentVote

He added, “Americans will NEVER forget”:

The American people aren’t fooled by the Democrats’ dirty tricks.

Americans will NEVER forget that Democrats have been triggered into impeaching the President — simply because they don’t like him…and they don’t like us.#ImpeachmentVote

Rep. Mike Johnson (R-LA) noted: “This is the first time in the history of this country than an impeachment has been pursued without a specific crime being alleged or proven”.

The real abuse of power here is on the part of the House Democrats, as they have recklessly pursued this impeachment – 20 times faster than the impeachment investigation of Bill Clinton – to reach their predetermined political outcome. 2/4

This impeachment will fail, but the Pandora's Box House Democrats have opened today will do irreparable damage to our country in the years ahead. 4/4

(Related: Gohmert Counter-Strikes After Nadler Accuses Him Of Spouting Off Russian Propaganda: “Have His Words Taken Down”)