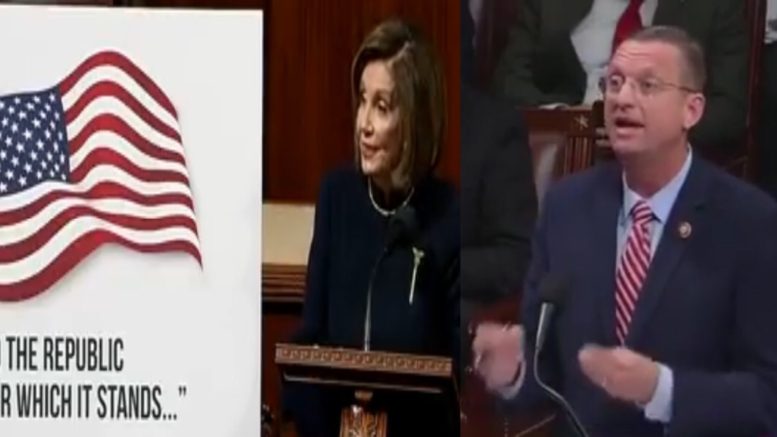 Ranking member of the House Judiciary Committee, Doug Collins (R-GA) was the first Republican to speak during Wednesday’s debate on the two articles of impeachment against President Donald Trump.

During the public hearings leading up to Wednesday’s debate, Collins was one of the fiercest defenders of Trump, passionately (and at times heatedly) putting forth the Republican case against impeachment and slamming Democrats for having wanted to impeach Trump since day one of his presidency, Vox reported.

In his opening statement on the House floor Wednesday, Rep. Doug Collins vehemently condemned the entire impeachment process: “From the very moment that the majority party in this house won, the inevitability that we would be here today was only a matter of what date they would schedule it,” Collins said.

It is certainly true that some members of the Democratic caucus — including Reps. Rashida Tlaib and Al Green, both of whom Collins mentioned by name in his speech — have long called for Trump’s impeachment. Shortly after being sworn in, Tlaib told a crowd of supporters, “‘We’re gonna go in there and we’re gonna impeach the mother******!’” per Vox.

Responding to California Democratic House Speaker Nancy Pelosi’s opening statement, in which she called the day “solemn,” the Georgia congressman said, “When you go looking for something for three years and especially this year since January, you ought to be excited!”

“In fact, I said it before and I will say it again: I do not believe no matter what was said today and even what has been said, this is not a solemn occasion. When you go looking for something for three years, and especially this year since January, you ought to be excited when you found it. But they can’t because what is now happening– it took me last night but I was thinking about it, why do we keep calling this a solemn occasion when you’ve been wanting to do this ever since the gentleman was elected. Mr. President came forward and did what he thought fit for the American people, but yet they wanted to impeach him,” Rep. Collins said. (Continued Below)

“One of our members, Ms. Tlaib, said on the night she was sworn in, ‘We’re going to impeach …’ Well, you know the rest. In May of 2019, Al Green said, ‘I’m concerned if we don’t impeach the president, he’ll get reelected.’ That is probably the most prescient thing said by the majority in the last year is they said, ‘We can’t beat him if we don’t impeach him’, Rep. Collins pointed out.

“I will tell you right now, Madam Speaker, we on the Republican side have no problem taking our case to the majority and to the people of this country because they elected Donald Trump and it is a matter for the voters, not this House, not in this way, not in the way this is being done. It has trampled everything this house believes in,” Rep. Collins said.

“But there is something that very much bothers me about the facts. There were five meetings– we’ll hear about those today, in which there was never a linkage made. There was one witness depended on 600 times in the majority’s report that in the end after questions had to say, well, that was my presumption of what was happening,” he continued.

“You see, this is an impeachment based on presumption. This is a poll-tested impeachment on what actually sells to the American people,” Collins explained. (Video Below)

Before concluding in his opening, Rep. Collins took a shot at Chuck Schumer after the New York Senator called for four witnesses to testify if impeachment moves to the Senate.

“But before I close this first part, I will have to recognize that even the Senate, the minority leader in the Senate, recognized that the House did not do their job because he can’t make the case to his own members. So he’s having to ask for witnesses– ask for more time. You see, and even yesterday, it’s sort of funny, I thought it [was] hilarious that the minority leader in the Senate went out and did a press conference and said, ‘They denied my witnesses, they denied my requests,'” he said.

This impeachment is about nullifying the 2016 votes of millions of Americans.

Why? Democrats think it’s dangerous to let voters decide whether @realDonaldTrump stays in office in 2020. pic.twitter.com/JZxZcfhYRN

(Related: Cohen Cites His Theater Education For Why He Knows Zelensky Was Acting To Protect Trump, Collins Reacts: “Folks Who Study Drama Understand You Read The Lines, Read The Transcript”)