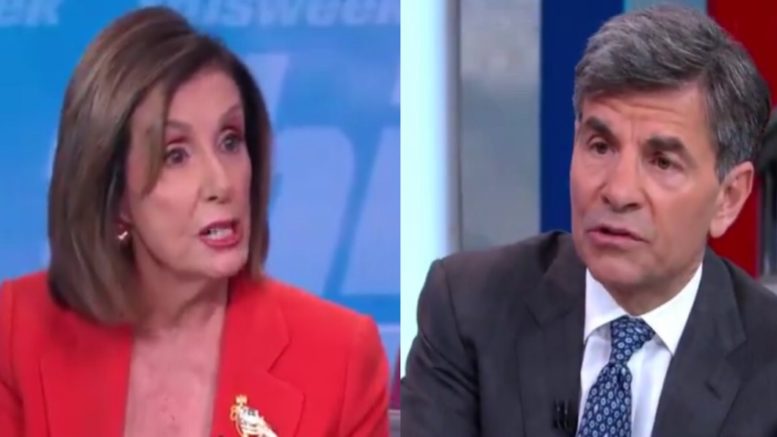 Sunday on ABC’s “This Week”, House Speaker Nancy Pelosi (D-CA) spoke with host George Stephanopoulos after she caved Friday to announce that she will move forward next week and send impeachment articles to the Senate. This comes after she delayed the process since last month and tried to make demands for a preferred trial in the Senate.

“Some of your critics have said that the House could’ve done a lot more to exhaust the alternatives to go through the entire process in the courts and to get– to see if they would rule on witnesses. One of those critics is a very important figure in the Senate, Senator Susan Collins,” Stephanopoulos told Speaker Pelosi.

The ABC host proceeded to play a video clip of Senator Susan Collins (R-ME), who said: “The House chose not to go to court to enforce its subpoenas. So there are gaps in what the House has sent us. I don’t understand the House’s decision on that.”

“That isn’t even true. We are in court on the witnesses,” Pelosi falsely claimed as the only two cases Democrats have pursued to the courts is Don McGahn and the Grand Jury information from the Mueller probe. “It could take a very long time,” she added.

Stephanopoulos didn’t correct her false claim but interjected to say: “You pulled back the subpoena on John Bolton.”

“But on the other witnesses, we have been in court. And we haven’t eliminated the possibility of ever subpoenaing– going forward with Bolton. But he has said in this two week period– that was another piece of progress we made, he would respond to a subpoena from the United States Senate. But the fact is, the president of the United States … President Trump has prevented [witnesses],” she said, even though the Commander in Chief is granted executive privilege. (Continued Below)

“Why not wait for the courts to rule?” Stephanopoulos directly asked Pelosi. [Emphasis added].

“Well, because it will be– how long do the courts take? the House Speaker admitted. “We have confidence in our case–that he’s impeachable. And this president is impeached for life, regardless of any gamesmanship on any part of Mitch McConnell.” [Emphasis added].

“We’re confident in the impeachment, and we think that it is enough testimony to remove him from office. However, we want the American people to see the truth, and why are they afraid of the truth?” Pelosi asked, even though she wants the Senate to call more witnesses, didn’t allow for GOP witnesses and won’t release the Intelligence Community IG’s testimony. (Video Below)

Pelosi: "Clinton allowed witnesses to come forward. Pres.Trump has prevented that from happening."@GStephanopoulos: "Why not wait for the courts to rule?"

Pelosi: "Because it will be— how long do the courts take? … We have confidence in our case." https://t.co/G6Ef3GUsED pic.twitter.com/A6WQ86tXku

Asked if she had second thoughts on holding on to impeachment for three weeks, Pelosi claimed: “No, no, no. We feel that it produced a positive result. … And raising the fact that we need to have witnesses and documentation, and if we don’t, that is a coverup,” she said, although she claimed to have “confidence in our case”, and that the House had “enough testimony” to go forward with impeachment.

"No, no, no," Speaker Pelosi tells @GStephanopoulos when asked if she has "second thoughts" about waiting to send the articles of impeachment, adding that it "produced a positive result" and highlights the importance of having "witnesses and documents." https://t.co/G6Ef3GUsED pic.twitter.com/cXwBcQv09F

Saturday, Senator Lindsey Graham (R-SC) told Fox News’ host Judge Jeanine Pirro that the Senate will try the case “as is” and “based on the evidence the House presents” before entertaining the idea of witnesses.

*(This is worth the watch)

"All I can say is that the impeachment articles are a danger to the Presidency. The way they impeach The President is un-American. This trial will end in a matter of days, not weeks. And he’s going to be acquitted. –@LindseyGrahamSC pic.twitter.com/ci5OtdQoht