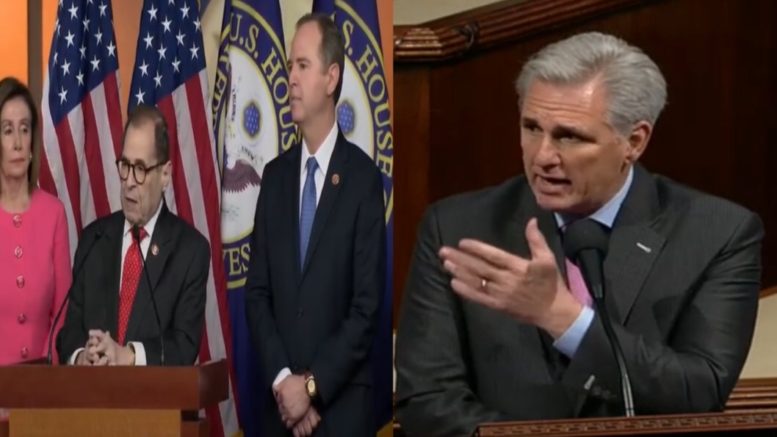 House Speaker Nancy Pelosi (D-CA) announced Wednesday, during a press conference, the seven Democratic lawmakers who will serve as impeachment managers to present their case against President Trump in a Senate trial, after holding back the articles for nearly a month.

House minority leader, Kevin McCarthy (R-CA), stepped to the podium and ripped Democrats in a fiery house floor debate before the House voted to send the articles of impeachment to the Senate.

Minority leader Kevin McCarthy slammed Speaker Pelosi for her month-long delay in sending the articles to the Senate after she and her Democratic caucus claimed that it was a matter of great “urgency” to impeach the president.

He also called out the House Speaker for trying to control how the Senate will hold the trial. “The idea of holding a sloppy impeachment case to force the Senate to change its rules is constitutionally and politically unheard of. Frankly, it’s just ridiculous,” the House minority leader expressed.

“In Artice 1, section 5, the Constitution clearly states: ‘Each House may determine the Rules of its Proceedings.’ It doesn’t say the House may determine the roles and proceedings in the Senate. If anything, the Speaker’s actions have only further persuaded members of the Senate that the evidence of impeachment was neither thorough nor satisfactory. … Let’s be honest, this was never about persuasion, it was never about the rule of law. It was about what Alexander Hamilton warned us: that one party would get control and just because of the animosity, would demean the process of impeachment,” Rep. McCarthy said.

The House minority leader also slammed Pelosi’s choice of managers to send to the Senate impeachment trial, saying, “By selecting these managers, the Speaker has further proven she’s not interested in winning the minds, the hearts, or even following the Constitution.” (Continued Below)

“Let’s take a look at the first three names Speaker Pelosi announced in her anticipated announcement earlier today. Chairman Schiff: a man who has already taken on the role of judge, jury, and fact-witness throughout the entire House impeachment process,” McCarthy pointed out.

“Chairman Nadler: someone who campaigned for the chairmanship of the Judiciary Committee that’s responsible for impeachment beginning as far back as December 2017– before you were even in the majority– on the notion that he would be the best person to lead the charge on potential impeachment against the president. … He campaigned for it. You put your best ideas out there– in 2017, that was the campaign,” he continued.

“Congressman Hakeem Jeffries: a member who almost to this date voted in support of impeachment. You know that was more than a year before the Ukraine call even took place,” McCarthy noted. (Continued Below)

“Those are just some of the managers. If you think about the members– on the day they were sworn into this body– told those who support them the greatest, that they were going to impeach [President Trump],” McCarthy said.

He also slammed Pelosi over her hypocrisy of “fairness”, as he pointed out that during the House proceedings, Democrats selectively leaked to the media, didn’t give the House minority witness, and didn’t give the president due process.

“The day that impeachment was asked to come forward, I sent a letter to the Speaker laying out 10 items, none that were made up. You know what they were? The fair process we’ve always used in the past. The answer was no. Because they’ve been working on this two and a half years– they could not let fairness determine the outcome,” McCarthy said.

“The same reason for this impeachment is the same reason it’s taken Democrats 30 days to send the articles to the Senate, just spite. They wanted to stain the president’s record without giving him a fair chance to clear his name. … For every American watching, take for instance this was your government– if you switched the burden of proof on you,” he continued.

“We have a Congressman Max Rose characterized it this way: ‘The president says he’s innocent, so all we’re saying is prove it.’ God forbid government accuses you of something as an average American, and the government says you have to prove it. We just switched a fundamental belief as an American. But only in this House, do we do that,” McCarthy stated. (Video Below)

“Even as early as just last Sunday in an interview, Speaker Pelosi made that point very clear to all of us. Asked what a Senate acquittal would mean, she said it didn’t matter. ‘The president is impeached forever.’ Is that what this is all about? Just a personality. Just an abuse of power that you have within a House that we all feared this country would never do. You could almost see in the Speaker’s smile how she spoke about this new standard, how incredibly solemn she was,” he added, referring to her interview with George Stephanopoulos.