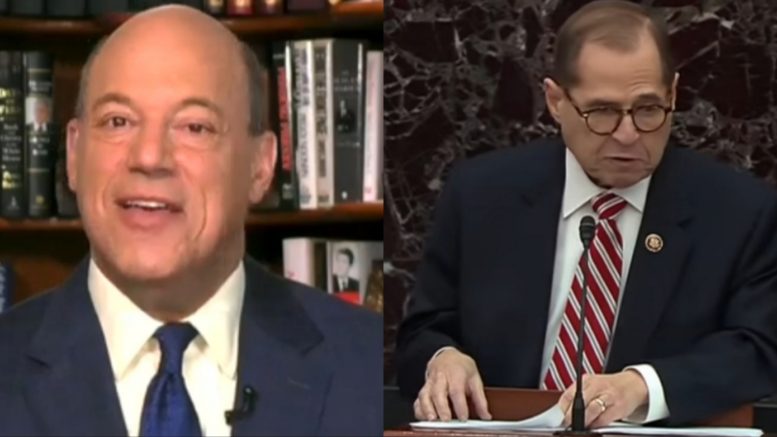 Former Press Secretary Ari Fleischer was compelled by remarks made by House Judiciary Chairman Jerry Nadler during day three of the Senate trial when he basically conceded that President Trump didn’t commit a crime.

Fleisher pointed to the part of Nadler’s almost hour long speech where he gave historical examples of how a President doesn’t have to commit a crime to be impeached.

Nadler stated, “In a last-ditch, legal defense of their client, the President’s lawyers argue that impeachment and removal are subject to statutory crimes or to offenses against established law — that the President can not be impeached because he has not committed a crime. This view is completely wrong.”

In reaction to Nadler’s remarks, Ari Fleischer said, “One point Jerry Nadler made this morning caught my eye, and that’s when he walked through history and he talked about how you don’t have to commit a crime to be impeached or convicted as President. And I think that’s what this is all about.”

“The Democrats, in that statement, concede that the President has not committed a crime,” he declared.

Related Article: Sekulow Lashes Out At Nadler After He Implies Trump Is Guilty Cause He Tried To “Hide Evidence”: “Is That The Way It Works, Mr. Nadler?”

Mr. Fleischer continued, “They think the crime is Donald Trump occupying the Oval Office. I think a fair-minded trial would say, ‘Was a crime committed that, therefore, we need to overrule the people and remove the President?’ That to me is the crux of the matter.”

“And, as was made clear by Jerry Nadler this morning, he didn’t have a crime that he pointed to,” Ari proclaimed. Video Below