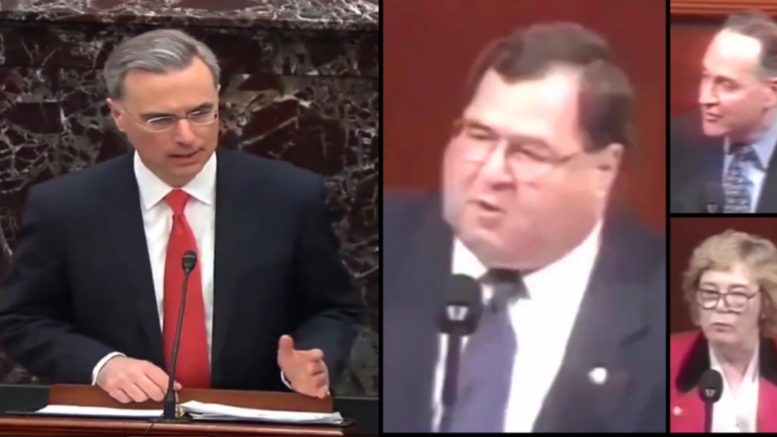 Pat Cipollone, White House Counsel for President Donald Trump, played videos of Democrats who had warned of a partisan, weak impeachment, saying, “You were right.”

“And if you look to words from the past, that I think are instructive as I said last night, they’re instructive because they were right then, and they’re right now,” Pat Cipollone told the Senate before proceeding to play clips of the Democrats’ own arguments used against them.

“There must never be a narrowly voted impeachment or an impeachment supported by one of our major political parties and opposed by the other,” Rep. Jerry Nadler stated during the Clinton impeachment. “Such an impeachment will produce the divisiveness and bitterness in our politics for years to come and will call into the question the very legitimacy of our political institutions.”

“You will set the dangerous precedent that the certainty of presidential terms, which has so benefited our wonderful America– will be replaced by the partisan use of impeachment. Future presidents will face election, then litigation, then impeachment. The power of the president will diminish in the face of Congress, a phenomenon much feared by the founding fathers,” she added. (Continued Below)

“I expect history will show that we’ve lowered the bar on impeachment so much we have broken the seal on this extreme penalty cavalierly that it will be used as a routine tool to fight political battles. My fear is that when a Republican wins the White House, Democrats will demand payback,” Chuck Schumer previously had said.

Pat Cipollone responded to the Democrats’ statements during the Clinton impeachment, saying, “You were right. But, I’m sorry to say you are also prophetic. I couldn’t say it better myself, so I won’t.”

CNN praised the White House’s defense calling it “very effective” by using the Democrats’ own arguments against them.

(Related: Pat Cipollone: Every Time You See Evidence Dems Concealed, Ask: “Why Didn’t They Show That To The Senate”)