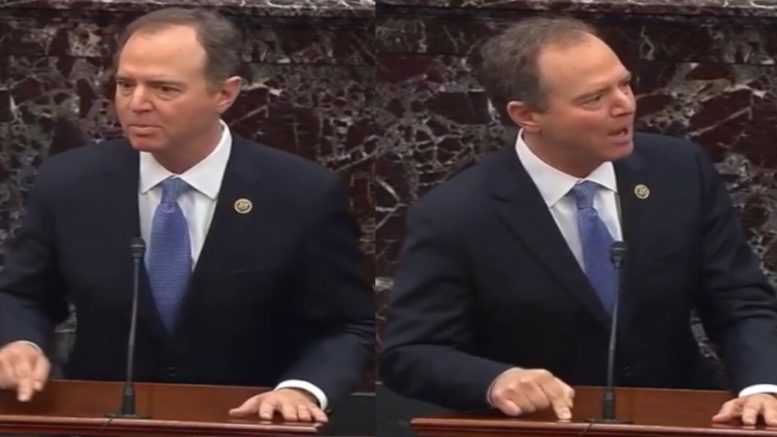 House manager Rep. Adam Schiff (D-CA) lashed out Thursday on the Senate floor after being asked about the alleged whistleblower, only to get instantly roasted after he didn’t answer the question that was presented.

“Two NSC holdovers from the Obama administration attending an all-hands meeting of NSC staff held about two weeks into the Trump administration and talking loudly enough to be heard, saying, ‘We need to do everything we can to take out the president,'” Chief Justice John Roberts read aloud a question submitted from Sen. Ron Johnson (R-WI).

“On July 26, 2019, the House Intelligence Committee hired one of the individuals Sean Misco. The report further describes relationships between Misco, Lt. Col. Vindman, and an individual alleged as the whistleblower,” Justice Roberts continued.

“Why did you committee hire Sean Misco the day after the phone call between President Trump and Zelensky? And what role has he played throughout your committee’s investigation?” Justice Roberts asked of Schiff.

Two former co-workers said they overheard Ciaramella and Misko, close friends and Democrats, discussing how to “take out,” or remove, the new president from office within days of President Trump’s inauguration. These co-workers said the president’s controversial Ukraine phone call in July 2019 provided the pretext they and their Democratic allies had been looking for. “They didn’t like his policies,” another former White House official said. “They had a political vendetta against him from Day One. Their efforts were part of a larger pattern of coordination to build a case for impeachment, involving Democratic leaders as well as anti-Trump figures both inside and outside of government, reported Real Clear Politics.

House manager Schiff stepped to the podium to respond: “First of all, there have a lot of attacks on my staff,” he claimed. “I’m appalled at some of the smearing of the professional people who work for the Intelligence committee. (Continued Below)

“Now, this question refers to allegations in a newspaper article, which are circulating smears on my staff and ask me to respond to those smears. And I will not dignify those smears on my staff by giving them any credence whatsoever, nor will I share any information that I believe could or could not lead to the identification of the whistleblower,” Schiff went on to say.

“I want to be very clear about something: members of this body use to care about the protection of whistleblower identities. They didn’t use to gratuitously attack members of staff. But now they do. Now they’ll take an unsubstantiated press article and use it to smear my staff. I think that’s disgraceful,” Schiff vented.

“The president would like nothing better than that. And I’m sure the president is applauding this question because he wants his pound of flesh. And he wants to punish anyone that has the courage to stand up to him. I can’t tell you who the whistleblower is because I don’t,” Schiff claimed. “But I can tell you who the whistleblower should be. It should be every one of us.”

“Every one of us should be willing to blow the whistle on presidential misconduct,” Schiff carried on. “If it weren’t for this whistleblower, we wouldn’t know about this misconduct and that might just be just as well for this president, but it would not be good for this country. And I worry that future people that see wrongdoing are going to watch how this person has treated the threats against this person’s life. And they’re gonna say, ‘Why stick my neck out? Is my name gonna be dragged through the mud?'”

“Will people join our staff if they know their names are gonna be dragged through the mud?” he wondered.

Twitter reacted to Schiff complaining about the attacks and instantly got roasted:

BREAKING: Over dozen Senators just asked Schiff about RCI story (below) & he did not deny it but complained about “attacks" & "smears on my staff." Schiff refused to answer direct question why he hired WB pal Misko day after the Trump-Ukraine phone call:https://t.co/huxDEwPQBm

Adam Schiff wouldn't answer a question about the conversations between his staff & the "whistleblower" before the complaint became public.

Could it be because Schiff was caught misleading Americans about these discussions?

ICYMI: Adam Schiff received THREE PINOCCHIOS for his claim that the "whistleblower" has a ‘statutory right’ to anonymity. https://t.co/dSO5BUzpXE

That was pretty awesome, watching sleazy Adam Schiff melt down and panic when he was questioned about his slimy coordination with the whistleblower, and his pals, to set up the President with their lies.

Who communicated w/the "whistleblower"? Why were you demanding something you already knew about?

9/15 He pretended to not know what the complaint was aboutpic.twitter.com/NE8AKMDV4A

Adam Schiff is not “protecting” a whistleblower.

SCHIFF IS PROTECTING HIMSELF.

When Schiff says he won’t dignify questions about his staff and Eric Ciaramella with an answer, what he means is “I won’t incriminate myself.”