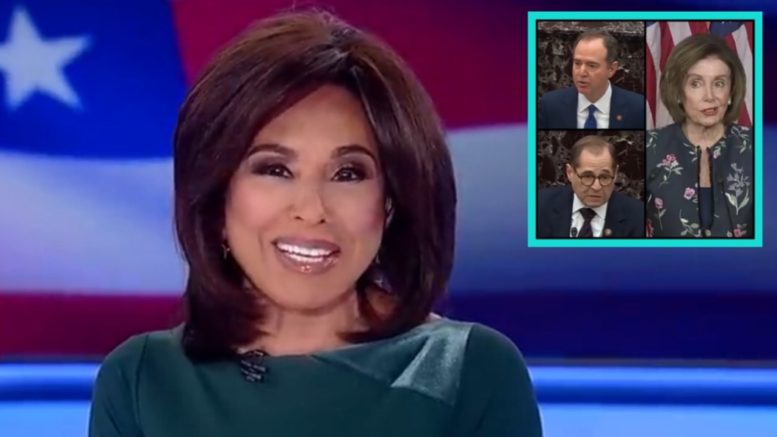 “I want to take this opportunity to thank our friends, specifically Democrats Nancy Pelosi, Adam Schiff, Jerry Nadler and the whole unhinged lot of them, for guaranteeing the reelection of President Donald John Trump in 2020,” she expressed.

Judge Jeanine Pirro explained that the Democrats “nonstop hate, hypocrisy, and hysteria has so exhausted us, that we honestly can’t wait to reelect [President Trump] again”.

She also said the Democrats “stunts” have been a “colossal waste of time” and have “sealed his reelection”.

“I keep asking myself why these Democrats keep making liars and fools of themselves?” she asked as she displayed a list of Democrats’ swings and misses. (Continued Below)

“And Adam Schiff says the president’s misconduct cannot be decided at the ballot box because ‘We cannot be assured the vote will be fairly-won’. Adam, are you stupid?” Judge Pirro asked. “Or do you think we are? Aren’t you guys embarrassed yet?”

“Why the Democrat Pary, allegedly the party of inclusion and openness, is at this moment of time the most obstructive, immunitas, nonproductive, rebellious group of haters the party has ever seen– can only be attributed to their Trump derangement syndrome,” she expressed, then proceeded to play clips of Democrats screaming to “impeach the president”.

“They’re like a bunch of thugs ganging up to destroy and remove the president. Hate is their crusade, overthrow is their mantra. And they use impeachment to overturn the will and the election of the American people. The funny thing is they call President Trump a monarch, a dictator, a fascist, but they do exactly what they accuse the president of doing every day,” Judge Pirro noted. (Continued Below)

“You know, I think I want a moratorium on the I-word. I’m so over talking about impeachment and I’ll bet you are too,” Pirro vented. “I don’t want to ever have to mention it again. But it won’t be over on Wednesday. They’re gonna do it again. They’ll find another make-believe whistleblower or another foreign agent that they’ll pay to make up lies about our president.”

“So, I say to myself, ‘Self, what are these fools doing in Congress? They could care less about us, about immigration, or heroin coming through the southern borders, or the fact that they held back the USMCA for months because they didn’t want to give President Trump a win. They can’t even give President Trump credit for taking out the world’s worst terrorists in a matter of weeks with no collateral damage. The military is rebuilt, the economy is soaring, unemployment at an all-time low,'” she declared.

“I guess I’ll just end it where I started: I want to thank our friends, the Democrats, for taking off their masks and exposing their hate, their condescension, and their disgust for the rest of us. I also want to thank the Democrats for uniting the Republican Party, except for Mitt [Romney]. We didn’t want Mitt anyway,” Pirro said. (Video Below)

“And, I want to thank Donald Trump. Not only for teaching the Republicans, finally, how to fight but for putting up with the nonsense that he goes through every day for the rest of us to make America great,” Judge Jeanine Pirro concluded.

(Related: Judge Jeanine On Pelosi & Schiff’s Impeachment Saga: “It’s Not Any Of Your Damn Business What Was Said” On The Phone Call)