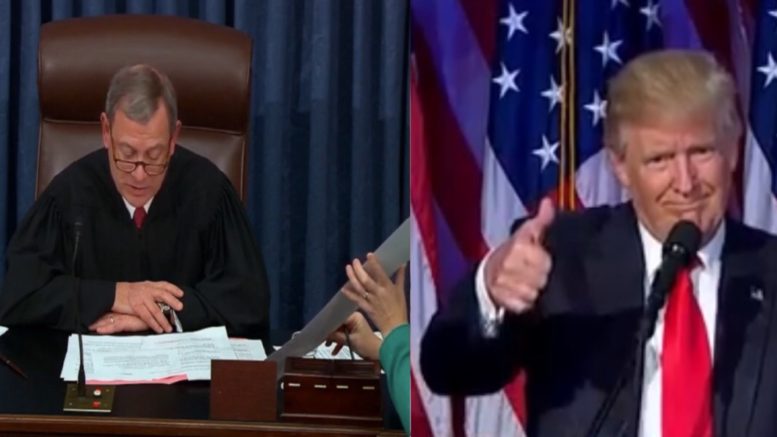 On Wednesday, the Senate overwhelmingly acquitted President Donald Trump on both articles of impeachment that were charged against him by House Democrats, with a final vote of 52-48 against abuse of power, and 53-47 on the obstruction charge.

The Senate fell far short of the two-thirds majority needed to convict and remove the president.

After Chief Justice of the United States John Roberts formally declared Trump acquitted, Senate Majority Leader Mitch McConnell, R-Ky., presented him with the “Golden Gavel” award as a thank-you for his service. Former Chief Justice of the United States William Rehnquist received the same award, which is usually presented to freshmen senators after long hours presiding over the body, for his handling of President Bill Clinton’s 1999 impeachment trial, as reported by Fox News.

“I look forward to seeing you all again under happier circumstances,” Roberts said as he concluded his remarks and prepared to depart the chamber.

President Trump immediately took to Twitter to repost a Time Magazine cover joking that he would never leave office.

He also announced: “I will be making a public statement tomorrow at 12:00pm from the @WhiteHouse to discuss our Country’s VICTORY on the Impeachment Hoax!” (Video Below)

Chief Justice Roberts Reads Not Guilty To Both Articles Of Impeachment And Acquitts Donald J Trump:

I will be making a public statement tomorrow at 12:00pm from the @WhiteHouse to discuss our Country’s VICTORY on the Impeachment Hoax!

The President also tweeted a video from the Tuesday night’s State of the Union: