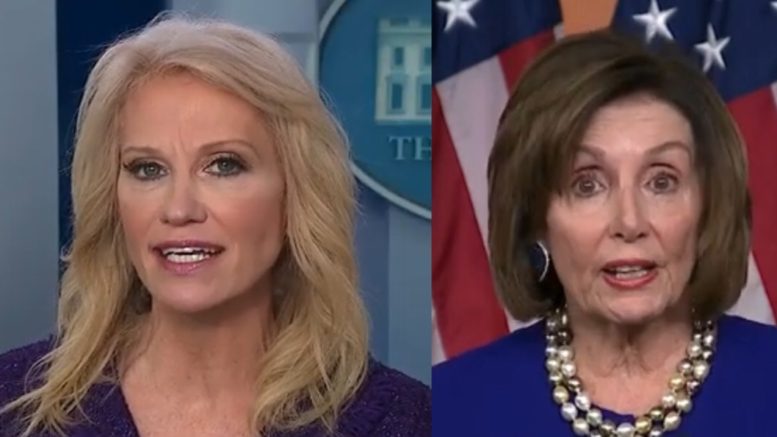 “[Democrats] have tried for three years now to get the president, instead of getting the story or getting things done on behalf of this country,” Conway said after President Trump’s critics attacked him for his victory speech in the White House East Room Thursday afternoon.

“First it was, ‘Let’s find the 70K electors in those 3 states and change the election results, then it’s the 25th amendment, it’s emoluments, it’s Russia, Russia for 3 years, and it’s the phone call with the Ukranian President,” Kellyanne Conway explained.

“Nancy Pelosi should stop lying,” Conway recommended. “She should stop pretending there is any kind of victory in the impeachment. The goal was to remove the president. It’s always been to stop Donald Trump from being and continuing to be the president. That’s the goal. They failed miserably.”

“Today, Nancy Pelosi lied. She lied from the podium today and nobody calls her out. She lied– that Obama started this economic recovery. The fact is, he presided over the slowest economic recovery since World World II, and that we now have a 50 year low on unemployment and the growth rates are through the roof. We’ve created over 7 million jobs. She lied about health care and nobody calls her out on her lies,” Conway also pointed out, referring to pre-existing conditions. (Video Below)