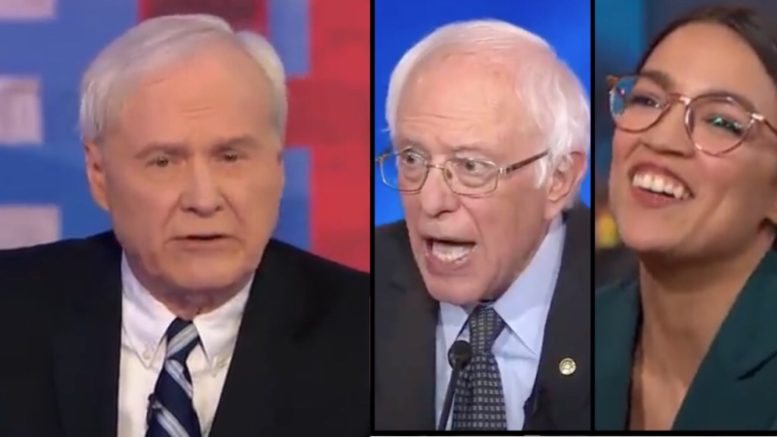 During the debate, the candidates on stage were asked if they were concerned about having a “Democratic socialist at the top of the ticket”, to which it appeared the only one to raise their hand was Senator Amy Klobuchar (MN).

Moderator George Stephanopoulos told Bernie Sanders that during the president’s State of the Union address, Trump said that “socialism” destroys countries, adding, “Those hits are going to keep coming if you’re the nominee.” He also pointed out that President Trump talked about Bernie’s infamous honeymoon in the Soviet Union back in the 1980s.

“Why shouldn’t Democrats be worried,”  Stephanopoulos asked Bernie Sanders of the “socialist label”. Sanders didn’t deny the label, but instead claimed: “Because Donald Trump lies all the time.”

After the debate, MSNBC’s Chris Matthews weighed in on how he felt about “socialism”. (Continued Below)

“Some of us like me grew up in a Cold War and saw some aspects of it after visiting places like Vietnam [as] I have, and seeing countries like Cuba being there. I’ve seen what socialism is like,” he continued.

“I don’t like it, okay? It’s not only not free, it doesn’t frickin’ work,” he declared. (Video Below)

In February 2019, President Trump spoke in Miami on a major foreign policy address to members of the Venezuelan community, declaring that “socialism is dying across the world.”

“We know that socialism is not about justice, it’s not about equality, it’s not about lifting up the poor — it’s about one thing only: power for the ruling class. And, the more power they get, the more they crave. They want to run health care, run transportation and finance, run energy, education, run everything. They want the power to decide who wins and who loses, who’s up and who’s down, what’s true and what’s false, and even who lives and who dies. This will never happen to us… America will never be a socialist country,” President Trump vowed.

Chris Matthews on Socialism: “I don’t like it, okay. It’s not only not free, it doesn’t fricken work.” pic.twitter.com/52v9fIRKy6

Democrats hesitate to say if they are concerned with a Democratic socialist at the top of the ticket:

STUNNING! Watch every leading Democrat hesitate to say they are concerned about having a Democratic Socialist at the top of the Democratic ticket. #DemDebate pic.twitter.com/LkSkuDrP4U

Bernie Sanders does not deny the “socialist” label:

Asked why Democrats shouldn't be worried about Pres. Trump's attacks on him with the "socialist" label, Bernie Sanders says, "Because Donald Trump lies all the time." https://t.co/0GxKJz7e8Y #DemDebate pic.twitter.com/9v5v4U5M8b

Related: Bernie Sanders Calls Trump ‘An Idiot’, Dan Bongino Fires Back: ‘I Have Never Seen A Bigger Phony, Fake, Fraud In Politics Than This Joker’