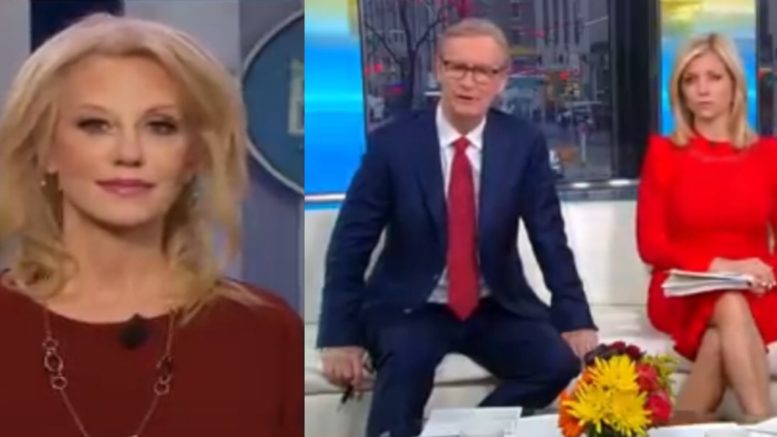 Counselor to the president, Kellyanne Conway, spoke with “Fox & Friends” Monday rejecting the complaints by Democrats and the media over the dismissal of Lt. Col. Alexander Vindman and former Ambassador to the European Union, Gordon Sondland.

Lt. Col. Alexander Vindman was escorted off White House grounds Friday, two days after President Trump was acquitted in the Senate on the impeachment charges brought by the House last year over his dealings with Ukraine. Also on Friday, U.S. Ambassador to the European Union Gordon Sondland, who testified during the House impeachment hearings, said the president recalled him from his position, as reported by Fox News.

“Are more heads gonna roll in the wake of the people who testified against the president?” host Steve Doocy asked Kellyanne Conway.

“In the case of the Vindman brothers, remember they were detailed here. I want to say quickly what that means: they’re employed today, they’re continually employed. Before, during, and after the testimony of Mr. Vindman, he was here and was his twin brother at the NSC. They were free to move about the complex,” Conway explained.

She said it was “ridiculous” for Democrats, like Sen. Chuck Schumer (D-NY), to claim there was “retaliation” by President Trump. “This is very typical in a White House staff to have a detailee for a temporary period of time, who then returns to what their full-time job is,” said Conway.

In regards to Gordon Sondland, Conway said that he “couldn’t keep his story straight”, during the impeachment inquiry hearings. (Continued Below)

Overall, Conway said there are many “holdovers” from the Obama administration who do not believe in President Trump’s foreign policy agenda, describing it as “the shallow state.”

“But these are people that don’t have access to the president. That was made very clear during those testimonies. The president said, ‘If I met that person, I don’t even remember it.’ And under oath, most of them, with the exception of one, had to admit they had never discussed Ukraine with the president of the United States. They have a different view as to policy should be,” Conway said..

“I’m somebody who’s always taking a look at the deep state, but I would actually say the ‘shallow state,'” she expressed. “We have people certainly in this administration that are probably holdovers and also people who don’t believe in President Trump’s agenda, but should be really happy to be part of an administration where our national security and our economic security are robust.” (Video Below)

“There are many men and women who would love to have these jobs in this administration and would do a great job. I always have my eye on them. I have a soft spot in my heart for those that are willing to serve and qualified to do so,” Conway added.

Kellyanne Conway’s full remarks; comments about Vindman and Sondland start at 6:40 into the video: