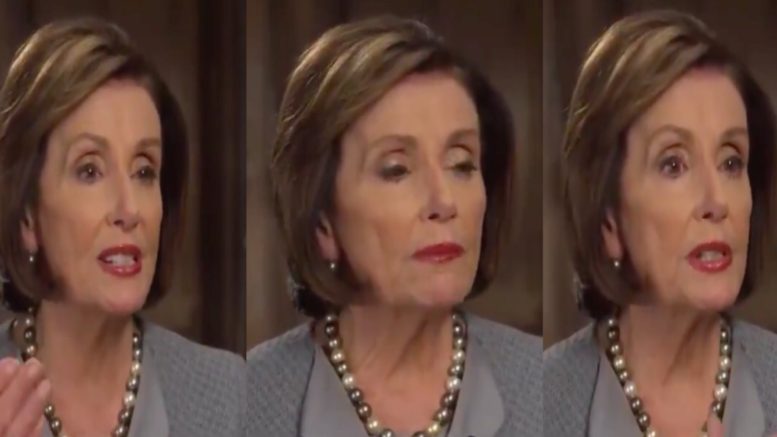 House Speaker Nancy Pelosi (D-CA) spoke with CNN’s Christiane Amanpour in an interview Saturday, admitting why she ripped up President Donald Trump’s State of the Union address, along with venting her frustration over the President’s acquittal in the Senate impeachment trial.

The Speaker also told Amanpour that she “can’t even envision a situation” where President Trump would be reelected, suggesting that any of the Democratic candidates running “would be a better president than the current occupant of the White House”, using a line from the so-called “squad” members.

“I’m a speed reader, so I knew what was there, and I got past a third of it and thought, ‘This is terrible’. I [notched] a couple of the pages thinking ‘I’m gonna remember what’s on this page, this page’. Then, I realized it was almost every page, had something in it that was objectionable,” she said.

Pelosi claimed it “wasn’t a planned thing”, and then admitted she did it for “attention” because the press did not seem interested in covering the Democrats’ legislation.

“One of my disappointments is that with the fact with all that we have done legislatively, where it’s equal pay for work, raising the minimum wage, gun violence, protection, issues that relate to our children, the list goes on, climate action now– we have very little press on it. And it seems that if you want to get press coverage, you have to get attention. So I thought, well, let’s get attention on the fact that what [Trump] said here today was not true,” she alleged. (Continued Below)

“What about though, the fact that the president seems liberated. And this is about Democratic politics, so I’m not asking you to criticize here. But [Trump] was acquitted, his poll ratings are high….” Christiane Amanpour began to ask, right after Pelosi claimed she wasn’t going to criticize the president while overseas in Munich, Germany.

She also weighed in on the Democratic candidates running for president, using the “squad’s terminology of the president: “I think we’re just what the Democratic Party is: a party of vitality, differences of opinion, which we will resolve. I have trust in the American people. Let’s see what the election’s put forth. It’s not up to me to decide. It’s up to the people. … Anyone of them would be a better president than the current occupant of the White House, but we want to be very positive about how we go forward.” (Video Below)

“You’ve been elected over and over and said to me before the midterms, ‘As long as [Trump] is there, I’m here’. Is that still the case for you?” Amanpour asked, to which Pelosi responded, “I can’t even envision a situation where he would be reelected. But we don’t take anything for granted.”

“We must be unified and making sure that he does not have a second term. Our country is great. The American people are wonderful. We’re a resilient country. We can withstand one term. The destruction he would do to the courts of our country and the environment… He must be defeated,” she expressed.

“I thought ‘well, let's get attention on the fact that what he said here today was not true,’” she tells CNN’s @camanpour. https://t.co/xDcJht4YY0 pic.twitter.com/DR3T33Txob

“I can't even envision a situation where he would be re-elected,” House Speaker Nancy Pelosi tells CNN’s @camanpour about President Trump and the 2020 race, adding that “we don’t take anything for granted.” https://t.co/xDcJht4YY0 pic.twitter.com/UdPDmUZC8J

(Related: Kellyanne Conway: “Nancy Pelosi Should Stop Lying- She Should Stop Pretending There Is Any Kind Of Victory In The Impeachment”)