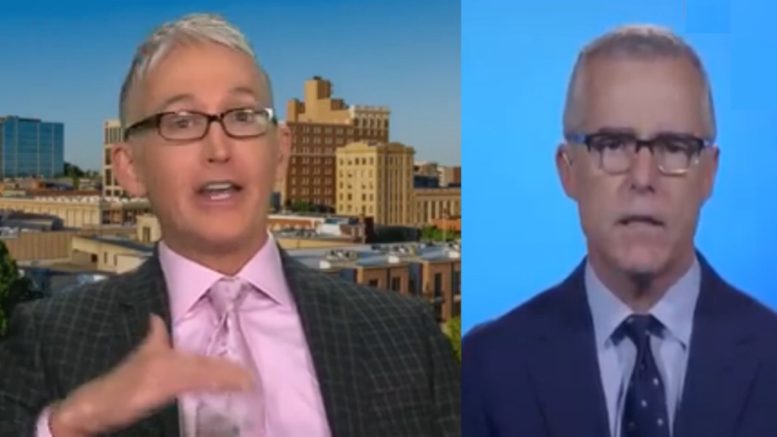 The Justice Department said Friday it will not pursue criminal charges against former FBI deputy director Andrew McCabe, after a nearly two-year-long investigation into accusations brought by the agency’s independent watchdog who found that he lacked “candor” when questioned about leaking to the media, reported Fox News.

In March 2017, then-Attorney General Jeff Sessions fired Andrew McCabe after Inspector General Michael Horowitz found that the former FBI Deputy Director had not been forthcoming, in regard to the handling of the FBI’s probe into Hillary Clinton’s use of a private email server, while she was secretary of state in the Obama administration

“Andy McCabe is not being indicted for a very discreet fact pattern, which is simply the leaking of information to bolster his own credibility during the Clinton investigation. That’s it. We should’ve known weeks ago when they were having trouble getting an indictment. If you’re having trouble getting an indictment, then there’s no way you’re going to get a conviction. You’ve seen a change in the U.S. attorney’s office in the district of Columbia. So he escapes indictment for that narrow fact pattern,” Trey Gowdy explained.

“But that has nothing to do with FISA and the initiation of Russia, and any other potential misconduct that Andy McCabe may have engaged in,” Gowdy continued. “That’s a really narrow discreet fact pattern that he’s not being indicted for.” [Emphasis added].

Maria Bartiromo asked Gowdy: “So it could actually be that he’s cooperating with John Durham or that he’s looking for a suspect in the John Durham, now criminal probe– is that right?” (Continued Below)

Asked what is John Durham looking at, in his view, Gowdy replied, “He’s looking at three things: the factual predicate with this Russia investigation. And I’m not talking about the summer of 2016, I’m talking about stuff that happened in late 2015 and early 2016. Remember, the DOJ and FBI told Paul Ryan and Devin Nunes, and myself, repeatedly and exclusively, that nothing happened before June of 2016. No payments were made, no contacts with the Trump campaign.”

“I’m sure John Durham is looking to see whether or not that’s true. He’s also looking at the FISA process and misrepresentations made to the FISA court. I think he’s also looking at that ICA– that intelligence community assessment that John Brennan got done towards the end of the Barack Obama tenure, to make sure whether or not that was thoroughly investigated and whether or not all the right information made its way into that ICA. Three important things, three separate things. (Continued Below)

“It shows that General Flynn was paid to speak in Moscow in December 2015. And George Papadopolous was invited to a conference in Rome in March 2016. And then Joseph Misfud told Papadopolous in April 2016, that Russia had Hillary Clinton emails. The list goes on and on, April, May, all the way up to July of the counterintelligence probe that started, according to the FBI. So what about all this other stuff happening in 2015 and early 2016? These are serious informants running up against Trump campaign people. How do you explain that if the investigation started in July?” Bartiromo asked Gowdy.

“The folks at the FBI and the DOJ– they’re the ones that are going to have to explain whether or not Michael Flynn speaking in Russia was something they were looking at separate or whether or not they were looking at that because he was an advisor to the Trump campaign. I could not be more clear: we asked the DOJ and the FBI repeatedly, ‘Did anything happen before June 2016? And we asked them at main justice, we asked them in a SCIFF, in the basement of the Capitol, and the answer was always the same: ‘Nothing happened with respect to the Trump campaign before June 2016,'” Gowdy said. (Video Below)

Gowdy believes that either the “FBI misrepresented facts to us, or it wasn’t the FBI, it was another agency that was doing it,” adding, “Both of those are important to know and John Durham, I hope, is going to be able to answer that question.”