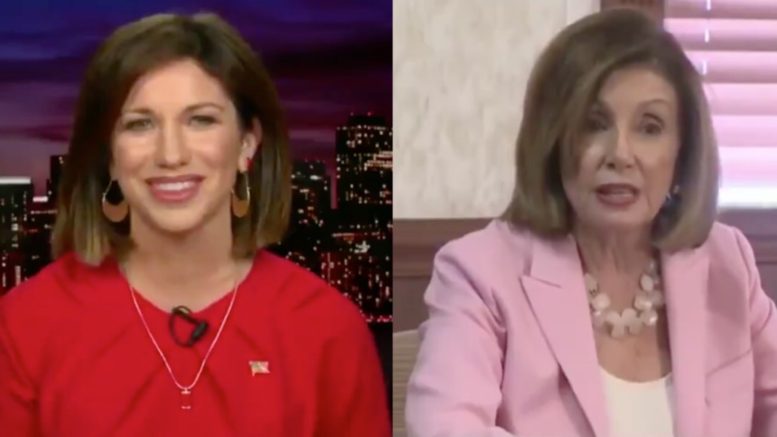 Congressional Republican candidate DeAnna Lorraine is running against Rep. Nancy Pelosi (D-CA) in California’s 12th District and she is putting up a fight to defeat the liberal House Speaker.

Monday on “Fox & Friends”, Lorraine explained why she has decided to “fight” against Pelosi, as the House Speaker is up for reelection and on the ballot in the primary on March 3, 2020.

Asked why she has decided to run, DeAnna Lorraine replied, “When you hear the words out of Nancy Pelosi’s mouth and you see her vile actions and disrespect toward Americans, how could you not be angry? How could you not be passionate and want to fight her and fight what she’s doing.”

“She is taking down America to such a bad path, to such a destructive path, and I believe that San Fransico is really the epicenter of cultural rot in America, and she is the embodiment of cultural rot,” the California Republican candidate expressed.

DeAnna Lorraine said in the past year that Pelosi’s campaign has “released 381 press releases”, adding, “Not one of them has addressed the homeless crisis or the drugs, or the feces, or the trash on the streets. It’s all been about impeaching the president or giving free health care to illegal immigrants or anything other than what Americans are truly dealing with”.

“There’s a lot of people that are unfortunately unhappy with her leadership because she is not taking America down a path that is full of prosperity and accomplishment like our president is trying to do,” Lorraine pointed out. (Continued Below)

Lorraine said that her campaign slogan is “God, family, and country”, noting that “everyone says that’s very bold, especially in San Fransico”.

“But you know what? It’s not bold enough. Because we have to actually put those things back into America. We have to have a strong sense of patriotism. I believe that we have to bring back faith in this very secular San Fransico, that it is right now. These are the things that are missing in America and the reasons why we are in this situation that we’re in,” she said.

“We do need to fight, we need to fight for unity. And I believe people in San Fransico are hungry for a message of unity and prosperity in America again, which is what our president wants to do. We need to have that. They are so tired of dysfunction and lawlessness in America,” Lorraine insisted. “And I think they are hungry for this message.” (Video Below)

The congressional Republican candidate also posted videos on Twitter of her campaign truck:

While Nancy is asleep or drunk, I’m Waking up hearts & minds in San Francisco to vote for positive change.
✅VOTE DeAnna
選德安娜为國會眾議員 pic.twitter.com/C2B3CJZw1A

#Chinese community LOVES DeAnna for Congress & @realDonaldTrump!🇺🇸🙌🏽We’re proudly driving all over Chinatown in my #DeAnna2020 Mobile blasting Proud to be an American & here’s the reaction👇🏽Perhaps it’s because they have fled from Communism and they want the FREEDOM of #America! pic.twitter.com/tufXqv1pus

(Related: Nancy Pelosi’s Opponent Flies A Plane Around San Francisco With A ‘Pelosi For Prison’ Banner In Honor Of President’s Day)